THE WASHINGTON POST – The fish stared back at me, eyes wide and shining, fins limp and wet. Still half-wrapped in paper, its gut hollow, it was the first whole fish I’d brought home to cook, and it forced me to reckon not just with dinner, but with life and death.

“Culturally, we’re not a country that spends a lot of time eating whole fish. We’re not conditioned to do it; we’re a fillet-eating society,” chef Ricky Moore of the Durham Saltbox Seafood Joint, told me by phone. “Most places abroad, eating whole fish is standard, it’s normal.”

“Growing up, we didn’t eat fillet fish,” Moore said, noting that he comes from “a long line of fisherfolk”.

“Our philosophy was, fisherfolk don’t catch fillets, we catch whole fish.” So, cooking whole fish is a more obvious approach in Moore’s mind. “I think it’s the most natural way to celebrate good fish, personally, from a preparation standpoint, and a textural standpoint,” he said.

Between grocery store rotisseries and home-cooked birds, we roast a lot of chicken in the United States, but processors cut their heads off so we don’t have to look them in the face.

There’s an intimacy in looking into another’s eyes, doubly so when its death means it’s crossed over from fellow animal to food. 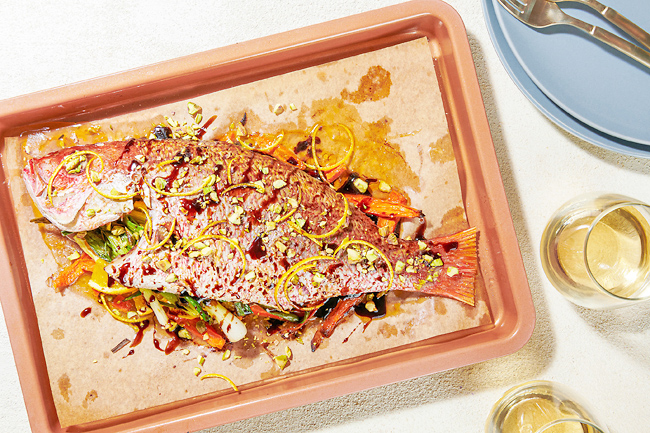 For a lot of human existence, this feeling was described in terms of dominion or disgust. For the past couple of decades, I’ve tried to approach it with humility.

If you eat fish, but you’ve never cooked one whole, tonight might be the night to give it a go.

Whole fish are often less expensive than fillets, and roasting one is at least as easy as roasting a chicken or large cut of meat.

“Simplicity is the key,” Moore advised. First, have your fishmonger clean it, descale it and trim the sharp fins. At home, bring it to cool room temperature, season it, stuff the cavity, and get ready to cook it at high heat, somewhere between 375 and 450 degrees. The trickiest part is knowing when it’s done.

How to tell when it will be buttery, not dry? “Checking for the degree of doneness is universal,” Moore said. “Find one of the dorsal fins. If it pulls out easily, then the fish is done.” As with all proteins that are cooked bone-in, there will be some carry-over cooking, so you’ll want to consider resting time, too.

This recipe calls for a whole bass or snapper, which gets seasoned, stuffed and roasted on top of zucchini or carrots for a sheet pan meal. Once out of the oven, you’ll drizzle the fish with pomegranate molasses, a sweet-and-tangy slip of a sauce that gives even the mildest fish lots of flavour. A sprinkle of pistachios adds a finishing touch of crunch.

Of course, you can get a whole fish without its head – any fishmonger will gladly chop it off – but if I’m buying a fish to cook whole, I wouldn’t want to: I want to look into its eyes, see their clear sheen. Especially if I didn’t catch the fish myself, that’s proof that it was swimming not too many hours before, proof that it’s going to smell and taste like the clean, salty sea.

Flavours from the Middle East – tangy pomegranate molasses, earthy pistachios – inspired this whole roasted fish. Look for fresh whole snapper or any kind of bass. Letting the fish come to room temperature before roasting helps ensure it cooks evenly. Scallions and orange slices stuffed into its cavity infuse the fish with lots of flavour. Roast it over thinly sliced vegetables for a full sheet pan meal.

To expedite the recipe, set the fish out to come to room temperature while you prep the remaining ingredients.

Not a fish eater? Try this with firm tofu marinated with scallions and orange slices. Chicken thighs are another option.

Can’t find pomegranate molasses? Use a mixture of equal parts honey and lime or lemon juice.

No pistachios? Pumpkin seeds or toasted sesame seeds would be nice here.

Set the fish on the counter to let it come to room temperature before cooking.

While the fish comes to room temperature, using a vegetable peeler and trying to avoid the bitter white pith underneath, remove one small strip of zest from the orange. Slice the orange zest into thin strips and set it aside for garnish. Halve the orange and slice one half into thin half-moons. Position a rack in the middle of the oven and preheat to 450 degrees.

On a large, rimmed baking sheet, toss together the sliced zucchini or carrot with one tablespoon of olive oil and spread the slices evenly in the centre of the pan; it’s okay if they overlap slightly. Season lightly with salt.

Oil the fish with the remaining olive oil, using more if needed, and season lightly with salt inside and out. Stuff the cavity with the orange slices and scallions.

Depending on the size of your fish, all of the fillings might not fit; reserve any excess for another use. Lay the stuffed fish atop the vegetables in the centre of the pan. Roast, rotating the pan once halfway through cooking, for 20 to 30 minutes, or until the skin is crisp and visibly puffed and a thermometer inserted in the thickest part of the head reads 135 degrees.

Allow the fish to rest for five to 10 minutes before serving.

To serve, using a thin spatula or large spoon, carefully transfer the top fillet to a plate. Discard the skin, if desired.

Serve with the roasted vegetables and additional pomegranate molasses on the side.

Have a serving plate or platter ready. Remove the pin bones along the back of the fish by cutting away the dorsal fin – follow the line of the fish’s back from just below the head to the tail.

Separate the head and collarbone from the top fillet, following the line where they meet and cutting about halfway through the fish. Do the same with the tail. Slide a thin, metal spatula under the top fillet to separate the meat from the spine, and slide the fillet onto the plate.

Grasp the tail, and pull it up to remove the bones from the centre of the fish, which should also remove the head. Transfer the remaining fillet to a plate and garnish with the remaining pomegranate molasses, pistachios and orange zest.