Resting with the fish

MIAMI (AFP) – Divers swim near brightly coloured fish and a stingray as they ride warm currents to the seafloor off Florida’s coast in the United States (US), where an underwater burial site for ocean lovers doubles as a marine sanctuary brimming with aquatic life.

With its graceful concrete arches, columns, plaques and other monuments and artwork covered in sea anemones, coral and algae, the Neptune Memorial Reef has transformed a non-descript patch into an elegant columbarium that is an example of a growing worldwide trend.

Construction of the unlikely burial site began in 2007 in shallow waters some five kilometres east of Miami. The initial plan was to install an artificial reef that would serve as a refuge for aquatic fauna of the area.

However the ashes of famed international chef Julia Child had been interred in the reef three years earlier, and it began evolving into an underwater mausoleum of sorts.

In search of funding for its project, the company creators landed on an idea: market the prospect of an environmentally friendly, undersea final resting place.

With communities around the world seeking greener burial options than traditional cemeteries, underwater memorial gardens have surged in popularity. 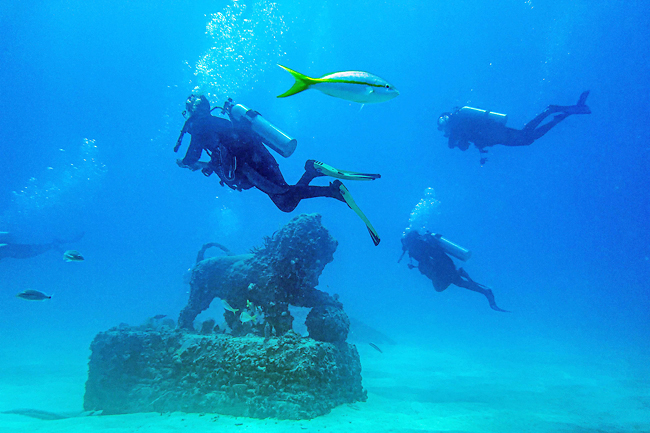 Similar projects are operating or in the planning stages in several locations worldwide, including off the coasts of the US states of Florida, New Jersey, North Carolina, Texas and Virginia.

The process at Neptune involves mixing the ashes of the dead in with the concrete of the columns, statues or other monument structures. Fifteen years on, the remains of some 1,500 people are interred in the underwater memorial, with another 1,500 having reserved spots for when they die.

Prices range from USD7,995 to USD29,995, depending on the location and support chosen.

At about 12 metres deep, divers swim between columns, under arches and past statues of lions, starfish, turtles and other marine animals.

On this sunny afternoon some are fixing copper tombstones where several sets of ashes have been placed.

One diver checks the coordinates and upon reaching an indicated location, glues the plaque to a concrete beam using epoxy resin.

“Our tagline is creating life after life,” Neptune Memorial Reef operations manager Jim Hustler tells AFP after a dive, stressing the environmental aspect of the project.

“We wanted to build a reef that was sustainable, would help replace the reefs that are dying all over the world.”

His goal at least in part is being met. More than 190 coral colonies have been installed at Neptune over the space of an acre, which is home to 56 species of fish, as well as crabs and other crustaceans, sea urchins and sponges.

“Every texture, shape, profile and depth is all designed to encourage animals to come,” explained Hustler, who noted that his project has only just begun.

His company has permission to build on some 16 acres which, once completed, will contain a sprawling series of reefs serving as the final resting place for the ashes of more than 250,000 people.