KHERSON, UKRAINE (AP) – When Ukraine wrested back Kherson from Russian occupiers nearly a month ago, it was a moment of glory and pride, hailed as the beginning of the end of the war. But hardship for the city’s residents was far from over.

Though free from Russia’s control, the southern city and its surroundings are still living the consequences of nearly nine months of occupation, and feeling the deadly proximity of the Russian forces, now stationed across the Dnieper River.

Taken early in the war, in March, parts of the Kherson region were held by Russia until November, when Ukrainians swept the area, regaining control of the main city – Kherson, with a pre-war population of 200,000 – and other Russian-controlled zones.

The liberation came just weeks after Russia unlawfully annexed Kherson and three more regions following sham referendums. But the Russians dug in on the other side of the Dnieper, with Kherson within reach of their artillery.

Ever since, almost daily shelling and power and water outages have become a new reality. 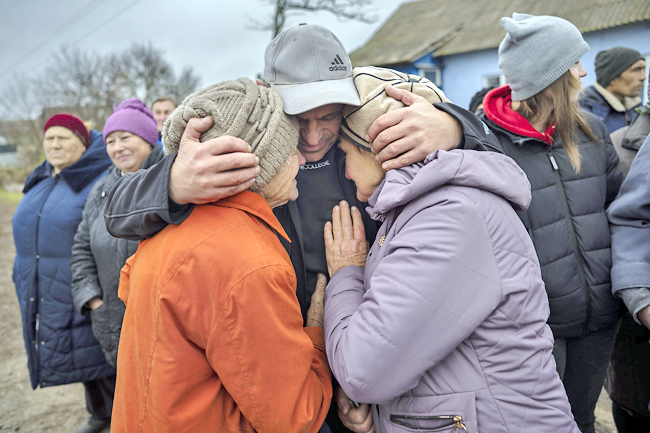 In the cold, people can be seen queueing for food or water rations. They mourn their dead and cover the bodies of new shelling victims that lie in pools of blood. Some draw water from the Dnieper, risking Russian sniper bullets from the other bank.

Unlike villages and towns directly on the frontline, the city of Kherson seemed relatively unscathed. When they regained control in mid-November, Ukrainian authorities organised concerts and the city rejoiced, briefly forgetting the war. Residents hailed arriving troops as heroes and wrapped themselves in Ukrainian flags that soldiers autographed. All beamed with pride and happiness.

Evidence of possible atrocities by Russian occupiers has emerged in accounts of alleged torture.

Facing frequent electricity outages, lines of people charge their phones at communal power spots in the city parks. At night, residents with flashlights rummage through the rubble of their bombed homes.

Some can’t take it. They pack belongings in their cars, take their pets and head for somewhere safer, hoping the war will end soon allow them to return home.

Those who stay are defiant and ready to endure hardship.

Children play at abandoned checkpoints raising a Ukrainian flag despite nearby explosions, and other residents seek to shame suspected Russian collaborators tied up in public.

Elsewhere, a framed photo of Russia’s President Vladimir Putin lies on the ground, its glass smashed.