Third-time blood donor Siti Nuramalina binti Jofri said one of her aunts often participated in blood donations and spoke about the health benefits of donating blood, prompting her to do the same.

“When I first donated blood, I was nervous and afraid. However, contrary to my expectations, you hardly feel any pain.

“Since that first experience in 2021, I donated blood again in the same campaign in March and this is my third participation.”

Abdul Mu’iz bin Haji Abdul Mutalip, 25, said he has been donating blood since 2015 when he was 18 years old. Aiming to help those in need, yesterday was his ninth time donating.

A total of 69 pints were collected during the one-day blood donation drive organised by Boeffi International (B) Sdn Bhd in cooperation with the Blood Donation Centre of the Raja Isteri Pengiran Anak Saleha (RIPAS) Hospital at the first floor of the OneCity Shopping Centre, Sungai Hanching yesterday. With the slogan, ‘People Live when People Give’, Boeffi believes they should give back to the community by helping the ones in need. 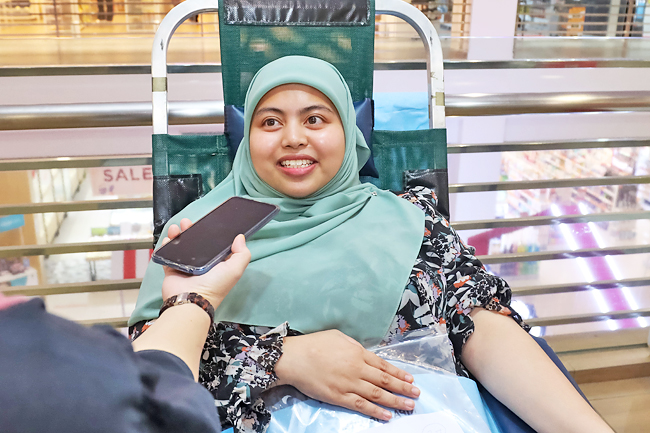 Boeffi has made tremendous achievements this year, most recently being named “Promising Startups in Asia” by the Asia Corporate Excellence and Sustainability (ACES) Awards 2022.

Organising a blood donation drive is one way for Boeffi to give back to the community and express gratitude to the public.

More public events, blood drives, and spreading awareness about the value of keeping a healthy lifestyle are among the activities that Boeffi has planned for the future.