Reach for the stars

The concert, organised by the Brunei Music Society (BMS) offered a platform to showcase the hardwork they have placed into their art.

Matthias Fang, 12, was five when he first started playing the violin. He played the Chaconne in G Minor for the concert.

“I love the violin. The tone is really nice and high, and it can be gentle and loud. It is also a nice and easy instrument to play,” he said.

One of the reasons that he has gotten so far with playing the violin, he shared, “is that I always keep trying, but there were a few times I wanted to give up because of time constraints and I got frustrated when I didn’t play it right”.

“Eventually I didn’t want to quit and I kept on going. My mother has helped me a lot,” he said, adding that, “She always practices with me and she has also become my guiding light in my violin journey.” 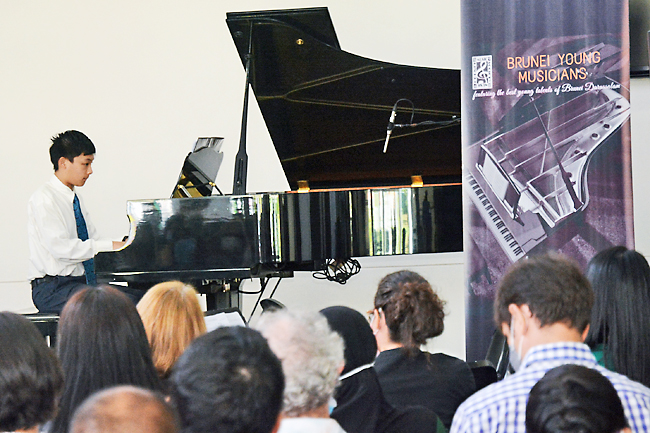 Meanwhile Flora Ngu, 17, is a vocalist who enjoys singing classical pieces. She performed II Baccio by Luigi Arditi for the concert.

“I think it is a very romantic genre (classical music) to sing. These days, most performances are on Pop or Broadway (music) and not much on classical music,” she said, adding that the concert helps showcase the beauty of classical music.

“After joining a singing competition during kindergarten, I realised I love the stage and the applause from the audience. I enjoy singing so much because I feel I can express all my emotions on stage,” she said.

Ngu said she has received professional training since she was seven, and have been in many performances and competed in contests around the world.

She is pursing a Diploma in Voice Studies. “I am trying my best to build a singing career,” she said, “So whatever opportunity that comes, I will go for.”

Shannen Xavier Tsen Jia Ee, 14, is a pianist. He performed Concerto in A Minor. “I love playing the piano because I’ve been surrounded by classical music all my life. For me, it is an outlet for my emotions, and helps me relieve stress.”

He said the concert was a good stepping stone for musicians to showcase their efforts and talent after two years of restrictions due to the COVID-19 pandemic. “It also encourages everyone who just started learning music,” he added.

He said he hopes to be able to apply for a full scholarship at the Barenboim-Said Akademie based in Berlin, Germany, and later be able to teach music in Brunei.