THE WASHINGTON POST – Bright green and yellow fronds wave in the ocean current as schools of neon-coloured fish dart around purple knobs and blobs. Welcome to the coral reef!

Coral reefs are amazing and important natural structures. They are made up of many species of corals shaped like fans and tubes and trees. Corals are made up of tiny animals called polyps. They are related to anemones and jellyfish.

The polyps’ hard exoskeletons make homes for algae. In return, the algae make food for the polyps through photosynthesis.

Working together, polyps and algae grow themselves into vast underground forests. They provide habitat and nursery grounds for marine animals.

They protect shorelines by absorbing the energy of waves during storms.

These coral forests are also in trouble. Maybe you’ve heard of coral bleaching? When ocean waters get too warm because of climate change, coral polyps push out their algae. Algae give corals their vibrant colours as well as nutrients (Corals can feed themselves, too, snatching shrimp and plankton with their tentacles). Without algae, corals turn white and begin to starve. They can recover from bleaching. But in this weak state they are more prone to diseases that can kill them. When corals die, the animals that depend on reefs struggle, too. 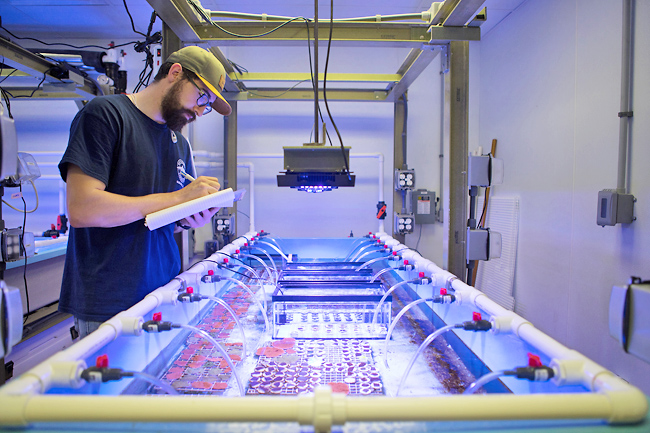 That’s why marine scientists around the world are working to protect and restore coral reefs.

Its branching corals like staghorn and elkhorn have had a hard time fighting off diseases in the past 40 years. “In some areas we’ve seen live coral cover go down to as little as one per cent,” said Stephannie Kettle. She works at the Mote Marine Laboratory and Aquarium in Sarasota.

Now, over 20 species of stony corals such as brain and boulder corals – what Kettle calls the “key backbone of the reef” – have come down with stony coral tissue loss disease. Kettle said, “It’s highly contagious and it’s highly deadly.”

It causes coral tissue to die and slough off its skeleton. It’s been killing coral in Florida and parts of the Caribbean Sea.

Scientists at Mote are trying to figure out which genes in some corals make them more resistant to this disease and to heat stress that causes bleaching. Mote breeds these corals in its lab to see, “Can we make a generation of corals that can resist both?” said Kettle.

Last year, mountainous star coral they planted spawned: It is reproducing on its own to grow the reef. Best of all, this coral seems resistant to stony coral tissue loss disease.

“We’ve had a lot of success,” said Kettle. But there’s still more scientists need to know to restore Florida’s corals.

Just like Florida’s reef, some reefs off the coast of the Hawaiian Islands have been bleached numerous times. Some have died. Some have recovered. Some that remain are struggling.

There are other stresses to Hawaii’s reefs. One is erosion. Explained conservation scientist at the Coral Reef Alliance (CRA) Ben Charo, Hawaii once had sugar cane and pineapple plantations. These plantations left behind poor-quality soil. This washes into the ocean when it rains and “dramatically reduces the light that’s coming into the water”, said Charo.

This slows coral growth because the algae inside coral needs sunlight to photosynthesise.

Meanwhile, there’s another problem: wastewater pollution. When people flush their toilets, for example, some of that waste leaks into the ocean. It causes bad kinds of algae to grow.

They grow quickly to compete with coral for food, causing the ocean ecosystem to fall out of balance. Erosion and wastewater pollution both weaken corals so they can’t fight off bleaching.

Scientists at CRA don’t re-grow coral forests. Instead, they try to stop the erosion and nutrient pollution making Hawaii’s corals sick. They teach people to plant native trees and plants that will trap sediment.

They show businesses how to build reef-friendly landscaping like rain gardens. These catch water during storms and filter out waste before it reaches the ocean. Scientists hope that more of these projects will provide relief to corals and help them thrive.

HOW YOU CAN HELP PROTECT CORAL REEFS
1. Reduce your carbon footprint!
Carbon is the number one driver of climate change. It comes mostly from burning fossil fuels such as oil and gas. Bike or walk to school or a friend’s house instead of having a grown-up drive you. Eat more plants. Recycle.

3. Be a good traveller.
Visiting a place near a coral reef? Pack out your trash so it doesn’t end up in the ocean.