ALTAMIRA, BRAZIL (AFP) – Holding a dead fish, Junior Pereira looks grimly at a puddle that used to be part of Brazil’s Xingu river, a mighty Amazon tributary that has been desiccated here by the massive Belo Monte hydroelectric dam.

Pereira, a member of the Pupekuri Indigenous group, chokes up talking about the impact of Belo Monte, the world’s fourth-biggest hydroelectric complex, which locals said is killing one of the most biodiverse regions on Earth and forcing them to abandon their way of life.

“Our culture is fishing, it’s the river. We’ve always lived on what the river provides,” said Pereira, 39, who looks like a man trapped between two worlds, wearing a traditional Indigenous necklace and a red baseball cap. He gazed at the once-flooded landscape, which Belo Monte’s water diversion has made a patchwork of puddles dotted with stranded fish. “We’ve lost our river,” he said. “Now we have to buy food in the city.”

Stretching nearly 2,000 kilometres, the Xingu ebbs and flows with the rainy season, creating vast “igapos” or flooded forests, that are crucial to huge numbers of species.

They are also crucial to an estimated 25,000 Indigenous people and others who live along the river.

Belo Monte diverts a 100-kilometres stretch of the Xingu’s “Volta Grande” or Big Bend, in the northern county of Altamira to power a hydroelectric dam with a capacity of 11,233 megawatts – 6.2 per cent of the total electricity capacity of Latin America’s biggest economy.

Built for an estimated USD7.5 billion and inaugurated in 2016, the dam diverts up to 80 per cent of the river’s water, which scientists, environmentalists and residents say is disastrous for this unique ecosystem. 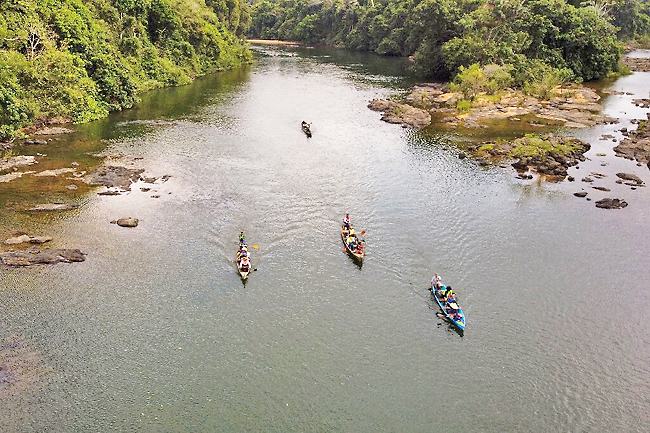 That is devastating fish and turtle populations whose feeding and reproduction cycles depend on the igapos, he said.

Sitting by the Xingu’s breathtaking Jericoa waterfalls, which the Juruna people consider sacred, Indigenous leader Giliarde Juruna describes the situation as a clash of worldviews.

“Progress for us is having the forest, the animals and the rivers. The progress white people believe in is totally different,” said Juruna, 40.

“They think they’re doing good with this project, but they’re destroying nature and hurting people, including themselves.”

As Lula, 77, prepares to take office again on January 1, the project is drawing fresh scrutiny from those hoping the veteran leftist will fulfill his promise to do a better job protecting the Amazon than outgoing President Jair Bolsonaro, who presided over a surge in deforestation. Touted as a clean-energy source and engine of economic development, Belo Monte has not exactly lived up to expectations.

According to the company that operates it, Norte Energia, the dam’s average output this year has been 4,212 megawatts – less than half its capacity.

A recent study meanwhile found its operations tripled the region’s greenhouse gas emissions – mainly methane released by decomposing forest that was killed by the flooding of the dam reservoir.

In 2015, researchers from the Socio Environmental Institute (ISA) conservation group teamed up with the Juruna to document the devastation. They have devised a new, less-disruptive way for Belo Monte to manage water, the ‘Piracema’ plan – named for the period when fish swim upriver to spawn.

Researchers said the plan is a relatively small tweak to the dam’s current water usage, adapting it to the natural flood cycles. Brazil’s environmental regulator is due to rule soon whether to order Norte Energia to adopt it.

The company declined to comment on the proposal, saying in a statement to AFP that it instead “recognises the plan established in the plant’s environmental licencing”. The decision is vital, said biologist of the federal government’s National Institute for Amazon Research Camila Ribas.

“When you completely alter the flood cycle, forests die,” she said. “These are incredibly intricate, interlinked systems. If Belo Monte and other hydroelectric projects disrupt them too much, it could spell the end of the Amazon.”