At the ceremony, His Royal Highness Prince ‘Abdul Malik handed over donations to Pusat Ehsan Al-Ameerah Al-Hajjah Maryam. The organisation received BND50,000 to support services and training for the differently-abled group at the centre.

Yesterday, His Royal Highness also handed over BND50,000 to the Society for the Management of Autism Related issues in Training, Education and Resources (SMARTER) Brunei.

Yayasan was established by His Majesty Sultan Haji Hassanal Bolkiah Mu’izzaddin Waddaulah ibni Al-Marhum Sultan Haji Omar ‘Ali Saifuddien Sa’adul Khairi Waddien, Sultan and Yang Di-Pertuan of Brunei Darussalam on October 5, 1992 in conjunction with the Silver Jubilee of His Majesty’s accession to the throne. Its establishment served as a medium of charitable endowment of His Majesty and members of the royal family as a symbol of care and love of his subjects, as well as the formation of a prosperous society.

With its 30 years of establishment, Yayasan has carried out programmes, projects and activities to improve and stimulate socio-economic development and well-being of the country’s citizens and residents. 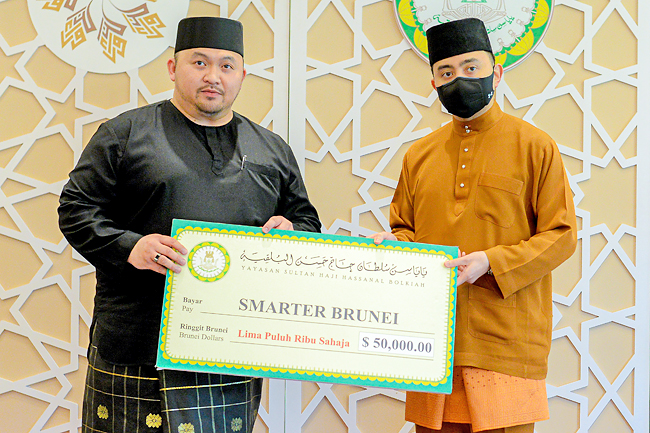