THE WASHINGTON POST – My youngest son, Jack, was born with an extra branch stemming from his heart that I was convinced was my fault. The anomaly constricted Jack’s airway like a vice. He choked on bite-size O’s, landed in the emergency room four times and endured a half-dozen operations before he hit two years old.

Years later, I read a news story about parental drinking preconception upping the odds of congenital heart defects. Bam! I had evidence of culpability.

After all, I sipped drinks during the six months before conception. I’d also downed a few shots of NyQuil in the days before I realised I was pregnant. Enter: extreme mum guilt.

(Never mind that the likelihood of heart defects was higher when dads-to-be imbibed, not mums.)

Although I was highly skilled at linking my “wrongdoings” to Jack’s faulty heart, I attributed his 10 fingers and toes, full-capacity lungs and seamless nursing to chance. University of Canterbury researcher and clinical psychologist Lisa Marie Emerson told me that this sort of irrational thinking is common among mums.

“Women are especially good at taking credit for everything that’s wrong in their kids’ lives, in part because the tremendous societal pressure to raise kids ‘right’ often falls on mums, not dads,” she said, pointing out that no one asks dads how they’re feeding their babies.

Unfortunately, mum guilt can have significant effects. Research suggested that feelings of guilt and shame catapult parents’ levels of depression, stress and anxiety. 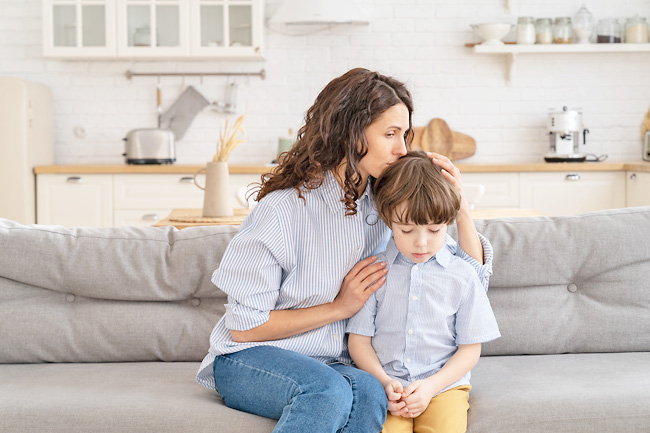 Other studies show that guilt surrounding a child’s brain injury, nursing difficulties, an adolescent’s mental health problems and more sabotages mums’ health, happiness and ability to parent effectively. There’s even evidence to suggest that self-blame interferes with the parent-child relationship.

According to New York-based psychotherapist Dana Dorfman, that sense of control is a maternal defence mechanism that enables us to believe we can prevent terrible things from happening to our children.

“A primitive part of the brain takes over, and we become like a child who feels responsible for his parents’ divorce,” she said. “With this sort of ‘magical thinking’, if you’re the cause, then you can be the solution.”

Parenting programme director of the Greater Good Science Center at the University of California at Berkeley Maryam Abdullah said it’s not uncommon for parents of children with a medical condition to look to science to explain their family’s experience.

“To some degree, science can be helpful, but it can also lead you down a rabbit hole of potential minefields,” she said, because the more you pick apart the research, the more likely you are to uncover “evidence” to suggest you’re responsible.

It turns out, that’s where I had planted myself: How old was I when I got pregnant? What is my family’s health history? How many happy hours did I hit before my positive pregnancy test?

It can feel as if our every move has outsize consequences for our kids. Young children don’t have the agency – or, in Jack’s case, the vocabulary – to make their own decisions.

It makes sense for us to take the mental leap that we’re responsible when bad things happen, to feel as if it’s our fault, and to feel guilty about whatever we imagine we did to create a more difficult life for our children.

“Guilt and shame are not pleasant emotions, but when we experience them to a lesser degree, they do serve a function,” Emerson said. For example, imagine that you yelled at your daughter for forgetting to feed the dog or that you didn’t show up to your son’s recital on time.

The ensuing guilt can motivate you to change your behaviour moving forward.

But beating myself up for my child’s heart defect won’t motivate meaningful change. It won’t make what happened to him go away. Even more disturbing, my frequent self-critical monologues were inadvertently teaching Jack (and my other two children) to play the self-blame game themselves.

By the time they hit preschool, I heard, “Sorry, mum, it’s my fault,” on a loop around my home.

Fortunately, there’s an antidote for the harsh talk: self-compassion. According to the literature, self-compassion has three key components: self-kindness (rather than harsh criticism), common humanity (seeking common ground with others rather than isolating) and mindfulness (staying in the moment and noticing your feelings).

In Emerson’s research, a 15-minute self-compassion writing exercise helped parents (about 83 per cent of whom were women) release their guilt and enhance their ability to deal with the challenges of parenting.

A 2019 study published in the Journal of Paediatric Psychology found that when parents of children hospitalised with burn injuries practiced self-compassion, they had fewer symptoms of depression and post-traumatic stress syndrome.

And in a 2018 study published in the Journal of Applied Research in Intellectual Disabilities, researchers found that, for parents of adult children with intellectual and developmental disabilities, self-compassion may offer greater resiliency against certain parenting challenges.

There’s even work to suggest that self-compassion exercises may act as a buffer against internal and external criticism.

So how can we blame ourselves less and feel positive more often? When feelings of guilt arise, Emerson said to use something called soothing rhythm breathing: Breathe in for four seconds, hold your breath for two seconds, then exhale for six seconds.

Repeat the cycle a few times to calm your nervous system and to anchor yourself in the mument. Then pause and focus on positive self-talk.

Because we tend to be kinder and more compassionate toward other people than ourselves, Abdullah suggested imagining how you would support a friend or family member. Chances are, you wouldn’t tell your friend she’s responsible for her child’s autism, attention-deficit/hyperactivity disorder or mental health problems, so don’t berate yourself for your children’s maladies.

Call to mind a person who loves you, someone who you can rely on when you’re unsteady on your feet. “You can even use the person’s terms of endearments in your self-compassion self-talk to marshal in the person’s presence,” Abdullah said.

Me? I wrote a letter to myself from my son’s perspective. It’s a safe bet that Jack doesn’t blame me (or his dad) for his heart defect. He has no memory of it.

By putting myself in my son’s shoes, I felt tremendous gratitude. The exercise reminded me that, despite the traumas we faced, our family is thriving.

It also helped me step outside of our experience and consider parents whose children have irreparable heart conditions. Do I believe they’re responsible for their kids’ challenges? Of course not. Inside of our shared quest to fix our kids’ heart ailments, there’s community.

And rather than belabouring the past, Dorfman suggested considering how the event or misstep affected your child and your family in positive ways. “Challenges are growth opportunities that not only help kids develop self-efficacy, but they can also bond you together as a family.”

That sort of silver-lining thinking not only helped me release the guilt and negative self-talk, but it also fostered feelings of peace and gratitude. Sure, I’d like to rewrite Jack’s second year of life, to obliterate the surgeries, X-rays and angst-filled days at the hospital.

But when I finally accepted that wasn’t an option, I learnt to let go and embrace what is: Jack is a healthy, happy kid who will try as many jokes as it takes to get you to laugh.

Good or bad, Jack’s heart defect and the process we went through to correct it are part of our shared story. The experience shaped who we are as a family, and the bottom line is, at least according to Jack’s perspective as I penned it: I showed up for him. “Those days in the hospital allowed me to truly experience the abundance of love you have for me. I wouldn’t change a thing,” he wrote. Then, the sign-off: “I love you with my whole healthy heart.”