THE WASHINGTON POST – No matter how much you loved seeing your family across the country for the holidays, travel can be exhausting. It was particularly stressful in recent days for Southwest passengers stranded by thousands of cancelled flights.

When we travel, “there are two stresses on the body: one’s physical, one’s psychological” said vice president of science and innovation Tim Roberts for Therabody. We battle uncomfortable seats, juggle flight schedules and sit in bumper-to-bumper traffic – often ending up with aching backs and spent nerves.

Our bodies don’t take kindly to being stationary for hours – or at least mine didn’t after six-and-a-half hours on I-95 during holiday travel from DC to New York.

Usually what makes me feel better is a scalding shower, a hot meal and a jog if I’m feeling ambitious. We asked travel and wellness experts for their best advice to ease the burden of a long travel day.

Travel, especially on a plane, can be dehydrating. “Standard planes are about as dry as the Atacama Desert, and with the oxygen of an 8,000-foot mountain,” said owner Jonathan Alder of the luxury travel company Jonathan’s Travels.

To combat this, start hydrating even before your trip, then during your travel day and after. 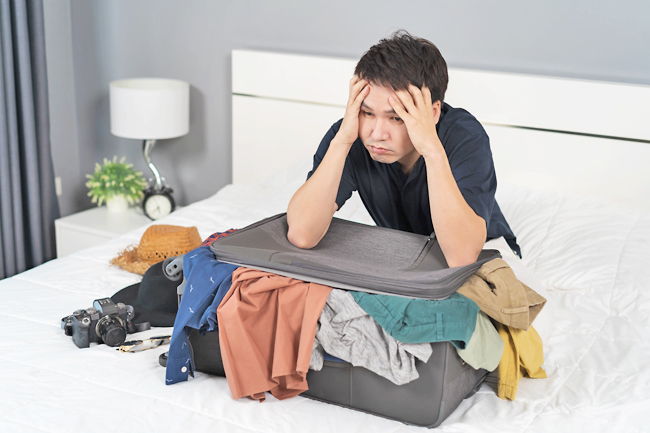 If you’re flying, drink at least 12 ounces of water every hour, nurse practitioner and director of patient health Jordan Crofton at the Well, recommended. She also adds electrolytes to her water.

What you don’t drink also counts. Nutritional practitioner Neha Deol at I Am Health, said travellers should avoid soda, alcohol and caffeinated drinks such as coffee. Alcohol is not only dehydrating, but it can wreck your sleep schedule, said physical therapist and co-founder Kelly Starrett of the Ready State.

If you need an energy boost, Deol said green tea will do the trick; it’s less dehydrating.

In the same vein, physician and author Fred Pescatore said to stay away from salty and sugary food.

If you’re not napping, stay engaged

Boredom is a culprit in travel exhaustion, said mindfulness instructor Linda Price of Minding Your Mind, a mental health education non-profit. Lack of movement and mental stimulation, like in long periods of waiting while travelling, is draining.

Price recommended listening to music, audiobooks and podcasts if you’re driving or reading, doing crossword puzzles, word searches or Sudoku if you’re on a plane.

With their 17-hour flights to the United States, Air New Zealand staff are well versed in long travel days. In addition to hydrating, airline spokesperson Leanne Geraghty said in-flight exercises are crucial to your travel wellness.

For road trippers, take regular breaks to stretch your legs, Deol said. One of her favourite stretches is to balance on one leg while pulling her other knee into her chest, then switching sides. (Bonus points if you can rise up to the ball of your foot of your standing leg.) Repeat three to four times, focussing on deep breathing to slow down your heart rate and improve your circulation.

After hours of sedentary slog, moving your body can give you a second wind. Starrett tells clients to treat their first day on the ground as an active recovery day. Keep your exercise light with activities like stretching and walking.

Intrepid Travel CEO James Thornton, gets similar results with a run. “It’s the best way to get prgrammed to the new time zone and release energy from being on the plane,” he said.

I’m love a jog, but I’m also a fan of trying local gyms and workouts. Sweating in a Bangkok Muay Thai class or trying gyms in Marrakesh was a way to get to know a new place and feel like a new person.

While you’re out moving, try grounding (being barefoot outside). Deol says walking your bare feet on sand or grass can help reduce inflammation and help you feel energised.

Simply being outside is ideal for clearing your head after being trapped on a plane, said regional manager Sebastien Maingourd of Le Barthélemy Hotel and Spa in the French West Indies. He tells guests to take a walk or quick swim to feel rejuvenated.

Refuel with something satisfying or healthy

Particularly if he’s travelling with his family, Thornton prioritises finding a good local meal as soon as he lands. “When we arrived in Rome this summer, the first thing we did was drop off our stuff and look for some great pasta and gelato,” he said.

After a serious time-zone change, “I love to take a nap”, said Kristal Hicks of Top Tier Travel Group. Even if you’re someone who can sleep on planes, a proper nap in a bed feels more restful because you get to extend your body, Hicks said.

Experts also suggest seeking out the right light at the right time and extending your circadian rhythm to combat jet lag.

For the best nap (and sleep later), Custom Jet Charters chief operation officer Benoit Ugeux said to pack your own pillow from home.

Take a shower or steam

Sometimes all I need is a shower to feel whole again after a long travel day. Roberts feels the same. “Even if you don’t have a lot of time between travel and what you’ve got planned for the rest of your day, hop in the shower,” he said.

Braver souls can take Crofton’s tip and try boosting their mood with cold therapy – either plunging in cold water or taking a 30-second cold shower.

Not in a rush? Give yourself a steam bath to hydrate your skin and open up your airways, recommended Switzerland’s Kempinski Palace Engelberg resort general manager Andreas Magnus. Prepare a bowl of hot water, then lean your face over the bowl and cover your head with a towel. (If you have it, add some Himalayan salt and eucalyptus oil.)

Work out your knots

Your body has been mangled in an uncomfortable seat for hours. Have a professional work out your knots, aches and pains with a massage.

General manager Vincent Parinaud of the Royal Hotel & Spa in France, said his first choice would be a Balinese-style massage that combines deep tissue techniques and gentle stretching, or recommends a general back and shoulder massage to focus on back pain and circulation. I don’t have the budget for a luxury spa treatment, so I’ll look for more affordable reflexology massage businesses.

The most elite tier recovery move: Don’t rush back into your normal routine. Even though we want to get the most out of our trips, you’ll thank yourself for sacrificing a vacation day to catch up before real life starts again.

“Even on relaxing vacations, being out of your comfort zone for a few days and around so many people can be draining – at least for me,” Rachel Orr wrote vouching for buffer days. “Think of it as a mini staycation at the end of your vacation.”