Peering into future of wildfire

LOS ALAMOS NEW MEXICO (AP) – Public schools were closed and evacuation bags packed last week as a stubborn wildfire crept within a few miles of the city of Los Alamos and its companion United States (US) national security lab – where assessing apocalyptic threats is a specialty and wildland fire is a beguiling equation.

Lighter winds last Friday allowed for the most intense aerial attack on those flames west of Santa Fe as well as the biggest US wildfire burning farther east, south of Taos.

“We had all kinds of aviation flying today,” fire operations chief Todd Abel said at a Santa Fe National Forest briefing last Friday evening. “We haven’t had that opportunity in a long time.”

In Southern California, where a fire has destroyed at least 20 homes south of Los Angeles in the coastal community of Laguna Niguel, Orange County emergency officials scaled back the mandatory evacuation area last Friday from 900 residences to 131.

People who remained on alert to prepare for evacuations west of Santa Fe included scientists at Los Alamos National Laboratory who are tapping supercomputers to peer into the future of wildfires in the US West, where climate change and an enduring drought are fanning the frequency and intensity of forest and grassland fire.

The research and partnerships eventually could yield reliable predictions that shape the way vast tracks of national forests are thinned – or selectively burned – to ward off disastrously hot conflagrations that can quickly overrun cities, sterilise soil and forever alter ecosystems.

“This actually is something that we’re really trying to leverage to look for ways to deal with fire in the future,” said Rod Linn, a senior lab scientist who leads efforts to create a supercomputing tool that predicts the outcome of fires in specific terrain and conditions. 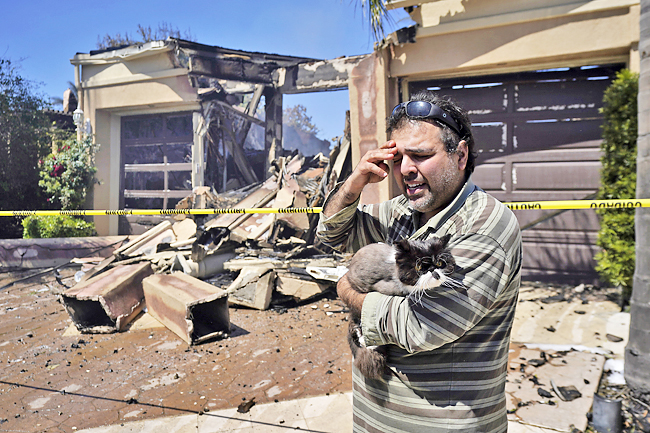 The high stakes in the research are on prominent display during the furious start of spring wildfire season, which includes a blaze that has inched steadily toward Los Alamos National Laboratory, triggering preparations for an evacuation.

The lab emerged out of the World War II efforts to design nuclear weapons in Los Alamos under the Manhattan Project. It now conducts a range of national security work and research in diverse fields of renewable energy, nuclear fusion, space exploration, supercomputing and efforts to limit global threats from disease to cyberattacks. The lab is one of two US sites gearing up to manufacture plutonium cores for use in nuclear weapons.

Still, the scientists were ready.

“We have our bags packed, cars loaded, kids are home from school – it’s kind of a crazy day,” said Adam Atchley, a father of two and laboratory hydrologist who studies wildfire ecology.

Wildfires that reach the Los Alamos National Laboratory increase the risk, however slightly, of disbursing chemical waste and radionuclides such as plutonium through the air or in the ashes carried away by runoff after a fire.

Mike McNaughton, an environmental health physicist at Los Alamos, acknowledges that chemical and radiological waste was blatantly mishandled in the early years of the laboratory.

“People had a war to win, and they were not careful,” McNaughton said. “Emissions now are very, very small compared with the historical emissions.”

Dave Fuehne, the laboratory’s team leader for air emissions measurement, says a network of about 25 air monitors encircle the facility to ensure no dangerous pollution escapes the lab unnoticed. Additional high-volume monitors were deployed as fire broke out in April.

Trees and underbrush on the campus are removed manually – 3,175 metric tonnes over the course of the last four years, said Jim Jones, manager of the lab’s Wildland Fire Mitigation Project.

This year’s spring blazes also have destroyed mansions on a California hilltop and chewed through more than 1,100 square kilometres of tinder-dry northeastern New Mexico. In Colorado, authorities said one person died in a fire that destroyed eight mobile homes in Colorado Springs last Friday.

The sprawling fire in New Mexico’s Sangre de Cristo Mountain range is the largest burning in the US, with at least 262 homes destroyed and thousands of residents displaced.

Nearly 2,000 fire personnel are now assigned to that fire with a 806-kilometre perimeter – a distance that would stretch from San Diego to San Francisco.

Atchley said extreme weather conditions are changing the trajectory of many fires.

Atchley says he’s contributing to research aimed at better understanding and preventing the most destructive wildfires, superheated blazes that leap through the upper crowns of mature pine trees. He said climate change is an unmistakable factor.

“And this is happening not only in the US, but in Australia and Indonesia and around the world.”

He’s not alone in suggesting that the answer may be more frequent fires of lower intensity that are set deliberately to mimic a cycle of burning and regeneration that may have taken place every two to six years in New Mexico before the arrival of Europeans.

“What we’re trying to do at Los Alamos is figure out how do you implement prescribed fire safely… given that it’s exceedingly hard with climate change,” he said.

Examples of intentional prescribed burns that escaped control include the 2000 Cerro Grande Fire that swept through residential areas of Los Alamos and across 12 square miles of the laboratory – more than one-quarter of the campus. The fire destroying more than 230 homes and 45 structures at the lab. In 2011, a larger and faster-moving fire burned fringes of the lab.

Atchley said the West’s forests can be thought of and measured as a giant reserve that stores carbon and helps hold climate change in check – if extreme fires can be limited.

Linn, the physicist, says wildfire modelling software is being shared with land managers at the US Forest Service, as well as the Geological Service and Fish and Wildlife Service, for preliminary testing to see if it can make prescribed fires easier to predict and control.

“We don’t advocate anybody using any of these models blindly,” he said. “We’re in that essential phase of building those relationships with land managers and helping them to begin to make it their model as well.”