THE WASHINGTON POST – Few earthly delights are better than a ripe peach. Its season is brief, and even when there’s a bounty, there’s no guarantee that the one you pick will be sweet and juicy, so there’s a temptation to bake them into pies and cobblers.

Most summers, I gamble again and again, hoping for that elusive, perfect peach. I eat them out of hand, over a sink or perched on a park bench with nothing but my chin to catch wayward juice.

Still, even a less-than-perfect peach can shine with some dressing up. A shortcake, with its buttery, biscuit-like base and soft cream surrounding fresh, juicy fruit is a fair compromise.

The peaches retain their meatiness in a cradle of buttery pastry, which offsets their texture and captures any excess juice.

This variation takes its cues from the classic dessert known as a peach Melba. Traditionally, it’s made with gently poached peaches, raspberry sauce and vanilla ice cream. Here, those flavours are remixed: Fresh, sliced peaches and whole raspberries are tossed with a touch of honey, which draws out their juices. Shortcakes based on a buttery biscuit dough are baked, split and stuffed with the juicy fruit and vanilla-scented whipped cream. 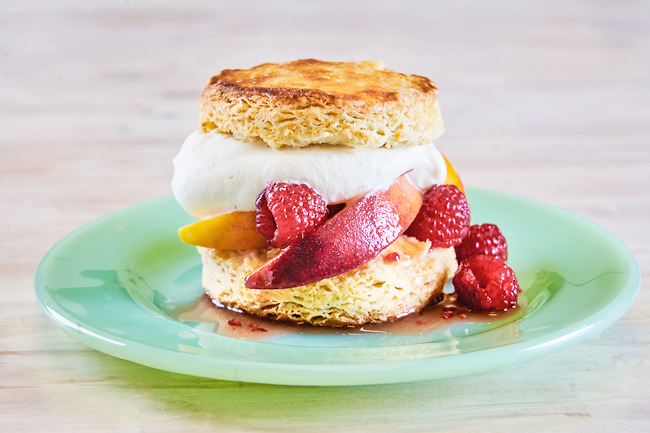 The shortcakes in this recipe are partially inspired by pastry chef Nancy Silverton’s biscuit recipe, which calls for frozen butter that gets grated into the flour mixture. I added a fair amount of sugar and an egg, in addition to buttermilk to help tenderise the dough, so that the finished shortcakes aren’t too crisp and can be eaten entirely with a spoon.

Though I call for whipped cream here, it’s easy enough to swap in vanilla ice cream for a somewhat sweeter – and more traditional – Melba in shortcake form.

When peaches are in season and perfectly ripe, there’s no need to bake them into a pie – stack them into shortcakes. This recipe takes a note from the flavours of peach Melba. The traditional combination of vanilla ice cream, peaches and raspberry sauce is remixed inside buttery biscuit-like shortcakes. Feel free to replace the whipped cream with ice cream. The addition of cornstarch here acts as insurance in case you over moisten or overwork the dough – it will still bake into tender shortcakes. If you don’t have raspberries, this recipe works fine without them. Likewise, it works well with plums, apricots and strawberries, too.

If you don’t have cornstarch, omit it and increase the amount of all-purpose flour to two cups instead, but be sure to use a light touch when handling the dough.

For the vanilla whipped cream

Make the shortcakes: Lightly grease a large, rimmed baking sheet or line it with parchment paper.

In a large bowl, whisk together the flour, cornstarch, sugar, baking powder, baking soda and salt. Using the holes of a large grater, grate the butter into the dry ingredients. Use your fingers to gently toss the butter with the dry ingredients until clumps the size of small peas form. This should take no more than 30 seconds. Once mixed, if your kitchen is warm, place the bowl in the freezer while you prepare the liquid ingredients.

In a liquid measuring cup, whisk together the buttermilk and egg until well combined.

Reserve two tablespoons of this mixture for brushing on top of the shortcakes. Stir the remainder into the butter-flour mixture, mixing gently with your hands just until a soft dough forms.

Lightly flour a cool work surface and turn the dough out onto it. Press the dough into a rough one-inch-thick rectangle. Starting on a short end and using a pastry cutter to help you, fold it into thirds, like a letter. Rotate the dough so the long side is facing you and gently press it into a rough, three-quarter-inch thick rectangle about nine-by-six-inches.

Using a floured two-and-a-half- or three-inch diameter cutter or thin glass, cut six rounds out of the dough. Gently place them, evenly spaced, on the prepared baking sheet. (You can press and reroll the dough to get two more shortcakes, but these will be somewhat less tender.) Brush just the tops with the reserved egg-buttermilk mixture, and place them in the freezer for 10 to 15 minutes, while you preheat your oven.

Position a rack in the middle of the oven and preheat to 450 degrees.

Prepare the fruit: While the oven preheats, in a large bowl, combine the peaches with the honey and raspberries and gently stir. Set aside at room temperature to allow the fruit juices to start to run.

Make the vanilla whipped cream: In the bowl of a stand mixer, or using a bowl and a hand mixer or whisk, combine the heavy cream, confectioners’ sugar and vanilla. Whip on medium-high speed until soft-but-stable peaks form.

To serve, using a small serrated knife, split each shortcake in half through its equator and place the bottom half on a plate. Top it with about four slices of the saucy peaches and raspberries. Add three to fou tablespoons of the whipped cream. Cap it with the top of the shortcake. Repeat with the remaining shortcakes and fruit, and serve, with any extra fruit and cream on the side.