The miniature car-shaped device, equipped with Wi-Fi remote control function, was developed by Rama Ibrahim, his brother Ahmed, and their classmate Yousef Aqil, all of whom are secondary school students, following months of research and experiment.

Mounted with a camera and an alarm, the rescue robot can be operated through a mobile phone application, and notify the rescue team with beeps and cellphone push notifications, the students told Xinhua.

“We came up with the idea to invent such a robot after the end of the latest wave of military violence in the Gaza Strip last year, in which dozens of trapped civilians lost their lives,” said Rama.

On May 10, 2021, Israel and Hamas, the ruling faction of Gaza, began a round of what was later described as their heaviest fighting since 2014, which lasted 11 days and killed more than 260 Palestinians and 14 Israelis. 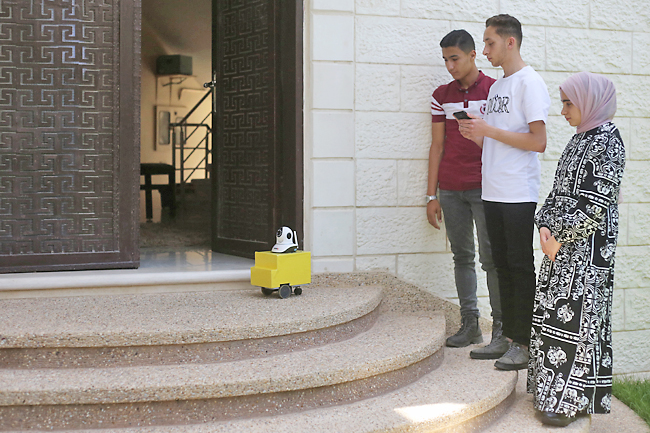 The Israeli military offensive came after Hamas-led militants fired a barrage of rockets into Israeli major cities in response to Israeli provocations at the Al-Aqsa Mosque compound in East Jerusalem.

“Unfortunately, we live in a conflict zone that witnesses constant conflicts, which means that we should prepare for such harsh conditions in the future,” Youssef Aqil told Xinhua.

Rama said local rescue teams have faced great difficulty in reaching the trapped people due to the constant bombings and constant power outages.

Therefore, they have a great need to take advantage of artificial intelligence and build a robot which can help to find solutions that enable rescue teams to reach the injured as quickly as possible, the inventors said.

“My colleagues and I studied the idea of building a robot and set a time plan for that, as we relied on the use of electronic tools available to us, most of which are remnants of damaged electronic games or electrical tools that are not used,” she noted.

Aqil added what distinguishes the robot is that it can reach the victims through narrow openings, hoping that such an invention can contribute to protecting rescue teams from exposure to danger.

The three students faced difficulties while manufacturing the robot in light of the lack of almost all the materials needed, including the small and accurate Quadcopter camera, in addition to the high price of other materials.

“Despite these obstacles, we insisted on making the initial shape of this robot,” Ahmed Ibrahim told Xinhua, adding they are currently working on converting the shape of the robot to mimic a snake that can reach the narrowest areas.