Over 700 affected by Tutong floods

Over 700 people have been affected by recent flooding in the Tutong District, according to a village leader.

Acting Village Head of Kampong Merimbun and Kampong Kuala Ungar Sani bin Angkat said some 470 residents have been affected in the two villages.

Some 200 houses in the district were impacted by the floods – 70 in Kampong Merimbun and Kampong Kuala Ungar, 60 in Kampong Rambai, 45 in Kampong Benutan and approximately 30 in Kampong Panchong, said the acting village head.

“This year alone, floods have occurred six times in the villages,” said Sani. “Two occurrences happened this month, which were larger and worse than before.”

The district office said some houses are flooded and some roads made impassible by normal and four-wheel drive vehicles. 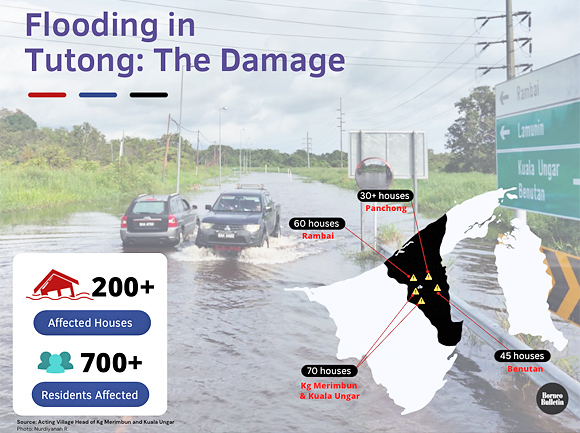 The Fire and Rescue Department is monitoring the water level in affected areas and is stationed at Jalan Benutan with a multipurpose vehicle and a boat.

Meanwhile, the Community Development Department (JAPEM) is distributing rations to flood victims with assistance from village leaders. The district office said 44 rations were handed out in Kampong Benutan, 14 in Kampong Rambai, 64 in Kampong Kuala Ungar and eight in Kampong Panchong.

The committee also urged the public to refrain from swimming at flood-stricken areas to avoid unwanted incidents.

Monitoring of water level has been implemented since heavy rain began early October.

Although the flood level is still under control, District Disaster Management Centre (DDMC) for Brunei-Muara, Belait, Tutong and Temburong districts along with grassroots leaders and other government agencies will continue to monitor the situation.