THE WASHINGTON POST – Nowadays racism and sexism are almost universally scorned as evils. But speciesism, the notion that humans are inherently superior to all other organisms and, therefore, entitled to exploit them, remains firmly rooted in our way of thinking – and acting.

Granted, charismatic flora and fauna like dolphins, redwoods and bald eagles are regarded as worthy of our empathy and protection. Weeds, rodents and creepy-crawlies of all kinds, on the other hand, are decidedly less admired.

On the bottom of just about everyone’s list are fungi, the Rodney Dangerfields of the biotic world. They are loathed by many who view them as unhygienic hangers-on that need to be stamped out with a lethal battery of fungicides, disinfectants and pharmaceuticals.

But eradicating fungi from the world – even if that were possible – would amount to signing our own death warrant, says Keith Seifert in his book The Hidden Kingdom of Fungi: Exploring the Microscopic World in Our Forests, Homes, and Bodies.

The retired Canadian mycologist (fungus scientist) has written an accessible primer on a much-maligned category of organisms whose lives sustain our own. Without fungi, forests could not grow, agriculture would grind to a halt, carbon could not be recycled. There would quickly be no life at all.

Fungi, the author tells us, are the meek that long ago inherited the Earth. There may be 10 times more species of fungi than all animals, plants and birds combined. (Nobody knows for sure, because most fungi have never been adequately surveyed.) Rob Dunn, an ecologist who contributed an engaging foreword, suggests that we rename our current Anthropocene era “the Myocene”, because “however great our human impact may be, it pales in comparison with that of the fungi”. 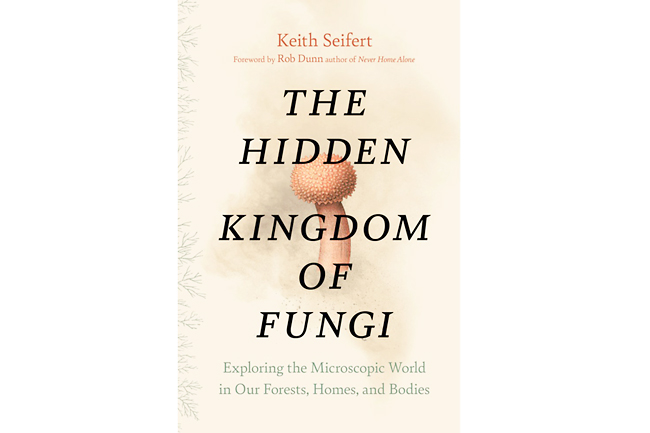 Yet even science came late to their study, and mycology remains a relatively underfunded backwater whose acolytes conduct their investigations in basement laboratories far from the gleaming halls of the more prominent disciplines.

Like the scientists who study them, fungi prosper in even the smallest and most inhospitable niches, from the bottom of the sea to the cracks in wood flooring. Fungal evolution diverged from other living kingdoms 1.5 billion years ago, and fungi remain among our planet’s most resourceful survivors.

The reason they are so indispensable is that fungi are nature’s undertakers, tasked with disposing of the dead, returning vital nutrients to the soil and ensuring the continuity of life.

These natural recyclers are everywhere. Seifert tells us that there are about 2,000 miles of fungal hyphae – microscopic filaments far thinner than a human hair – in a single teaspoon of rich organic soil. Fungi inhabit our guts and colonise our skin and hair follicles. These companions rarely pose threats to human life, the author assures us, although there are notable exceptions: the mould aspergillosis, for one, which kills thousands of people a year because of hospital-acquired infections. Poison mushrooms (mushrooms are the fruiting bodies produced by certain fungi) contain deadly mycotoxins that discourage foragers.

For the most part, however, fungi live in harmony with the ecosystems that they help keep in balance. But that balance is being disturbed. With climate change, fungal tree diseases spread by bark beetles are destroying conifer forests throughout North America. Fungal rusts and smuts that are proliferating in our increasingly warmer and wetter world endanger the world’s coffee supply. Seven out of the nine major crop diseases that threaten our food supply are fungal.

Despite their destructive potential, fungi have a generous knack for working cooperatively with other organisms. Their best-known symbiotic partnership is with lichen, in which algae produce food for fungi through photosynthesis, and the fungi knit the algae together into a composite organism whose most important ecological function is breaking rocks down to create new soil.

Less well known – until recently at least – are the vast underground networks of mycelium in forests, termed “the woodwide web”, which connect trees to one another and facilitate the transfer of nutrients and information among them.

Plants depend on the fungi that live on their roots to help them better absorb nutrients, protect against pathogens and tolerate drought. Seifert says we need to harness these talents. Instead of lacing fields with nitrogen-based fertilisers to artificially stimulate plant growth, the author envisions a shift toward “biofertilisers” – fungi-rich inoculants that will help crops to take nitrogen directly out of the air.

Fungi are also being cultured as meat replacements, and their mycelia fibers have been enlisted in the manufacture of biodegradable packaging and building materials. These voracious microorganisms are being used to clean up oil spills and radioactive waste, and to break down plastics. Bioprospectors are seeking out new varieties of fungi in the wild that can help produce a new generation of pharmaceuticals and psychoactive drugs.

The author credits these humble organisms with the capacity to spark a revolution in the way that humans relate to nature. Technology is often seen as being opposed to the natural order. But the burgeoning field of “mycotechnology” points to a future in which we will learn to work together with the natural world rather than against it. “Look to the fungi. Learn from their ways,” Seifert urged.

The book is fact-heavy but lacking in the kind of entertaining anecdotes and asides that might make for easier reading. It also jumps from topic to topic without exploring anything in much depth. These are less flaws than the nature of the task that Seifert has set for himself – to provide an encyclopedic survey of the field.

For the innately curious, The Hidden Kingdom of Fungi will be an eye-opening introduction to a secretive world that most of us know too little about.