HAIKOU/KUALA LUMPUR (XINHUA) – Boiled chicken, rice cooked with chicken oil, and dip make up the simple and delicious Hainan chicken rice, which has been lingering nostalgia for overseas Chinese in Southeast Asia.

More than a century ago, more and more Hainan people went across the ocean to Southeast Asia, bringing along their native dish Hainanese chicken rice.

The owner, Andrew Wong Hin Hau, whose ancestral home is Qionghai, Hainan Province, has been cooking Hainan chicken rice since 2003.

Wong gets up at around 4am every day to buy the ingredients at the market, starts to prepare the dish at 5.30am and gets everything ready around 10.30am. 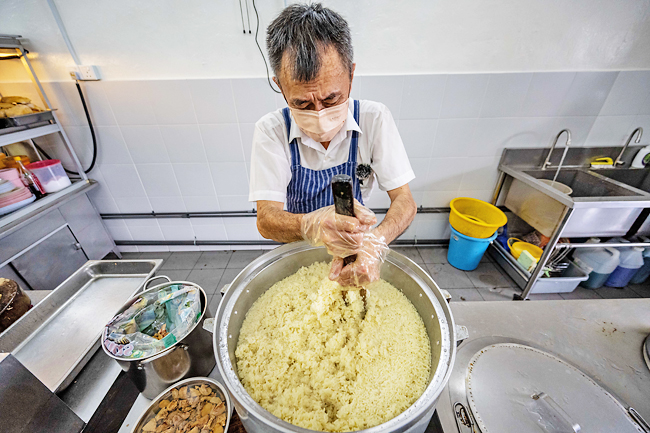 He said the most important thing for cooking Hainanese chicken rice is to choose chicken of good quality, use Thai fragrant rice, and make the dipping sauce thick.

“Hainanese chicken rice looks ordinary, but it is not easy to make it well,” said Wong.

Wong has been constantly improving the recipe. “If the guests are not satisfied, I will find a way to make it better,” he said, adding that however, he never replaced the ingredients with cheaper ones. “You can’t cheat your customers by using inferior ingredients just because prices keep rising”.

Over the years, Wong always tries local Hainanese chicken rice when he goes to a new place, such as Shanghai, Hong Kong and Thailand. He wants to make his restaurant better by studying the dish at other restaurants.

In his eyes, Hainanese chicken rice is a delicacy and heritage from his hometown. “As a Hainanese, I’m proud to cook it, so I will continue to do it,” he said, noting that he has been cooking it for 19 years, and it’s his dream career.

Welcomed by the diners, Wong’s restaurant sells about 180 servings of Hainanese chicken rice per day. Scott Chong, from China’s Guangdong Province, is a regular customer.

“The taste is good, especially the tender chicken and the fragrant rice,” he said.

Wenchang, a city in Hainan, is the birthplace of Hainanese chicken rice. On the island, Wenchang chicken is the basic ingredient for chicken rice.

Song Shenmei, 69, is the owner of a chicken restaurant in Wenchang. As the fourth-generation successor, he has been running the restaurant for more than four decades.

Song recalled that in the early 1980s, an overseas Chinese opened a chicken restaurant in Singapore. When he returned home, he came to visit Song’s restaurant to learn how to cook chicken and make the sauce.

“Some overseas Chinese also like to watch me cooking, and when they learn how to cook, they cook it at home,” Song added.

Hainanese chicken rice not only satisfies the diners but also embodies the taste of home for overseas Chinese from Hainan.

It is a vivid reflection of the cultural exchanges of people along the Belt and Road countries from history to reality.

President of the Kota Kinabalu Hainan Association Michael Heng Yee Boon is a second-generation Malaysian. Heng said chicken rice was always served during the Spring Festival, and his mother would make it into rice balls, which symbolised “reunion” in Chinese.

Having tasted Hainanese chicken rice in both Hainan and Malaysia, Heng said the dish was different in the two places regarding its sauce and way of cooking.

“Our ancestors came to Malaysia to do business not just with Hainanese. There are different races and different cultures here, so we have combined the cultures to innovate Malaysia’s Hainanese chicken rice,” he said.

“The Hainanese chicken rice in Malaysia is very international, and it is enjoyed by Malays and foreigners alike,” he said, noting that it is the wisdom of their ancestors.

“It’s a touching moment whenever we have Hainan chicken rice, for us it’s not only a delicacy, but indeed a cultural root of us, and we would continue to pass it on,” Heng said.