Of romance, identities and intellect

AP – David is a fisherman and Aycayia is a mermaid. It’s pretty obvious where the story goes from here: David falls for Aycayia. But author Monique Roffey isn’t giving us an endearing tale of love – this is a story of duality and curses.

The Mermaid of the Black Conch is a uniquely Caribbean novel with all the hallmarks of the genre presented in different manners. Roffey moves between a general narrator, David’s thickly Caribbean journal entries and broken stanzas of Aycayia’s free-form poetry.

Insidiously, David and Aycayia’s first meeting in 1976 is in Murder Bay. David is smitten by her strange beauty and Aycayia by his music.

David ceases fishing for fear of her entanglement in his nets, but his efforts backfire when Aycayia follows the sound of his motor out to a fishing competition and is ensnared by two Yankee men, intent on a stunning victory, which, it turns out, is the mermaid.

Upon learning of her capture, David plans to rescue Aycayia and return her to the sea. But his scheme falls apart when she begins to change back into a woman, the curse put on her by other jealous women from her Taino tribe apparently lifting after some 1,000 years. 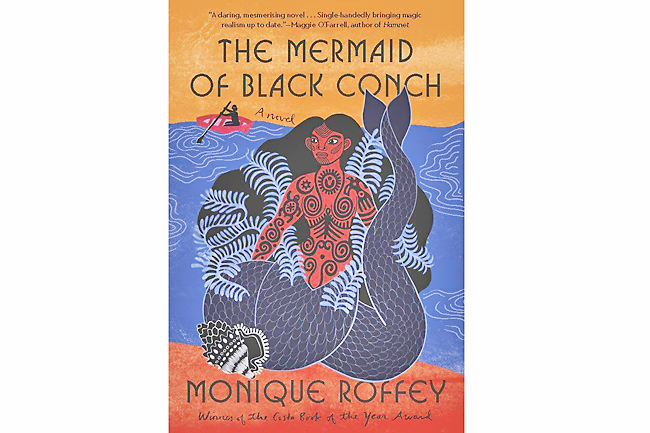 When Aycayia is inadvertently introduced to Reggie, the only deaf person on the island, they form a deep, fast bond on the basis of their otherness in Black Conch society. The mermaid metaphor is applied to gender, disability and oppression throughout the book. They’re filed under “curse”, described as loneliness.

Tension is constant throughout a story that, perversely, loses steam as it nears its climax. Roffey, however, makes up for a lacklustre ending with the strong storytelling up to that point.

Vivid imagery, discussion-worthy themes, Creole verbiage and a melding of history and magic make The Mermaid of the Black Conch come to life. It’s a confluence of lore in which subtle details change depending on who is telling the story. Each has their own idea of what it is to be a man, a woman, the oppressor, the oppressed, or something in between worlds.

In representing so many so roundly, Roffey maintains a fine balancing act portraying identities that are not her own while connecting them to ones that are by their shared relationship: the push and pull that Aycayia comes to learn transcends the ocean, the bedroom and the human race to encapsulate nature as a whole.

The novel itself exhibits the same in-betweenness as its characters and author – who was born in Port of Spain, Trinidad, but lives in London – though The Mermaid of the Black Conch is far from cursed for it.

Having won the Costa Book of the Year and the Costa Novel Award 2020, it seems Roffey has hit her stride with her fifth book, being re-released with its new accolades to adorn it.