THE WASHINGTON POST – It looks like a scene from a tense thriller movie – a dark octopus rises from its lair on the ocean floor, sneaking up toward another octopus that lurks, barely visible, nearby among a blanket of shells and algae.

The second octopus shrinks away, while the first attacks by raising its arms and shooting a cloud of debris through the water toward it. Then, amid a swirl of grey silt, both retreat to their respective dens.

While octopuses have long been known to thrash around underwater, researchers now believe they have video evidence that shows the creatures can not only throw objects – an uncommon behaviour in animals – but may also be capable of deliberately targetting each other.

Perhaps out of rage, perhaps to protect their eggs – or possibly because they are seeking the octopus equivalent of personal space.

Researchers from the University of Sydney described several incidents of octopuses throwing debris during social interactions, including attempted sexual exchanges, which they said provided evidence that octopuses were targetting each other on purpose. 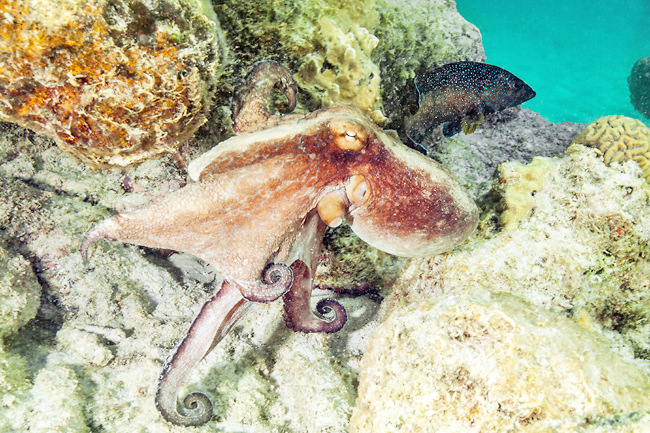 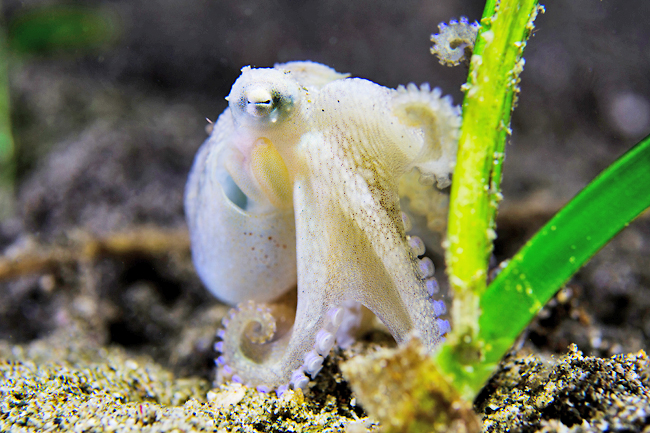 They had analysed more than 20 hours of footage from Jervis Bay, off the south coast of New South Wales, Australia, from 2015 and 2016, observing 10 octopuses from the octopus tetricus species – also known as gloomy octopuses or the common Sydney octopus.

Their findings published last week in the peer-reviewed PLoS One journal.

In one clip, a female octopus threw 17 objects in 60 minutes – hitting other octopuses nine times. On another occasion, a single female threw material 10 times, with half of those attempts successfully hitting a male in an adjacent den who had been attempting to mate with her.

Even the researchers’ camera came under fire.

Once, an octopus threw debris six times at a stationary camera, which researchers said was accidentally placed too close to its den, hitting it twice.

“We can’t be sure, but we think some hits are probably intentional,” Australian researcher and professor Peter Godfrey-Smith told The Washington Post, adding that they found the wild octopuses used a “jet-propelled throw” to project material through the water – essentially, by releasing the debris from their arms while also creating a powerful jet from the siphon located under their arm web.

Researchers said the frequent octopus throws “appear to be mildly aggressive” and that this apparent targetting of members of the same species “is a rare form of nonhuman projectile use”, which has only been documented among a handful of social mammals.

“We doubt if it’s playful,” Godfrey-Smith said of the behaviour caught on camera.

“I think a lot of it is probably about the octopus equivalent of ‘personal space’. “

The videos are significant, experts said, because they show that the octopuses’ behaviour is “distinctive and not just a familiar case of octopuses using their ‘jet’ on objects around them”, a behaviour which is already known. The report acknowledges that it is difficult to prove the gesture is targetted, as “showing intention in a behaviour is difficult in non-human animals”.

“Some throws hit other octopuses, but is this deliberate? We certainly don’t think it’s 100 per cent clear, or close to that. But I do think it is more likely than not,” Godfrey-Smith said.

Nonetheless, the study added, the throws are significant even if there is no deliberate targetting – because “they do have social effects in interactions between individuals” studied at the sites.

Octopuses hit during such throws “often altered” their behaviour in response – many “octopuses in the line of fire ducked, raised arms in the direction of the thrower, or paused, halted or redirected their movements”, researchers said.

Researchers said they hope to do further research and plan more recordings, though they have faced challenges in recent years due to the coronavirus pandemic and storms and flooding in Australia.