Not just a toy story

KUALA LUMPUR (BERNAMA) – It is common to see people collecting superhero action figurines, but Mohamad Afiq Faiz Mohamad Amin prefers figurines of personnel in uniformed services such as the police and armed forces.

Not only that, the 33-year-old psychology officer from Gombak, Selangor, has the ability to make 1:6 scale (about 30-centimetre-tall) figurines, a skill that requires creativity, precision and patience.

The Works Ministry staff member said he started learning how to make figurines 15 years ago after finding it quite difficult to get figurines of local heroes in the market.

“Usually, local collectors are obsessed with collecting figurines of characters from foreign films such as Hottoys from Hong Kong that produces Marvel and DC Comic figurines.

“But, it is hard to find individuals who are good at making figurines related to country’s history. It is probably because it requires research to produce a perfect figurine,” he told Bernama.

Mohamad Afiq Faiz has a collection of 24 local heroes in full dress uniform. Among them are figurines of a female police officer during the Communist insurgency period, Home Guard personnel (1948-1960) and a Malay Regiment officer during the battle against Japanese soldiers in Bukit Chandu (1942). 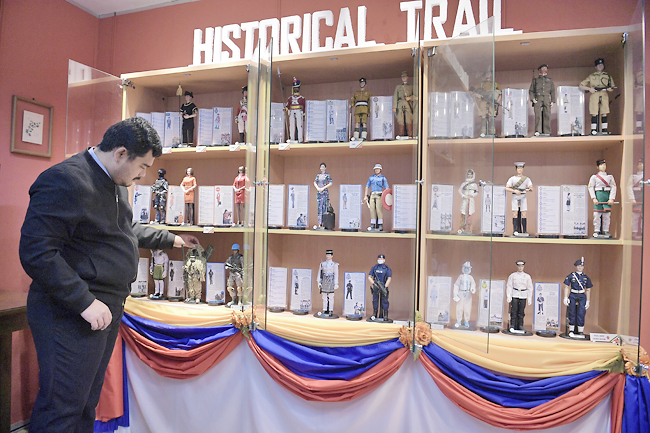 He also has figurines of a member of the Special Action Unit (UTK), naval special forces (PASKAL) officer, and the Malaysian Battalion (MALBATT) peacekeeping force officer.

Other figurines include flight attendants of Malaysia Airlines and Air Asia and frontliners wearing personal protective equipment (PPE) in the fight against COVID-19.

All the figurines are now on display in the Works Ministry office to lift the spirit of patriotism and enliven this year’s National Month and Malaysia Day celebrations.

Mohamad Afiq Faiz said each of his silicone figurines was infused with elements of storytelling.

“My mother was an officer at the National Archives and since I was young, I was exposed to the country’s history. From there, I started thinking of doing something that could raise the people’s interest in history,” he said.

On the challenges he faced in making the figurines, the father of one said it involved arduous work, namely conducting research in museums, ordering materials and accessories or using recyclable materials such as paper and aluminium to make the figurine’s costume.

“Another challenging part is painting the figurines. I have to use the film colourisation technology to turn old black and white photographs of uniformed personnel to colour,” he said.

“There are also materials that are only available overseas.”

Asked whether he intends to sell his figurines, Mohamad Afiq Faiz said he has no plans to do so despite having spent thousands of ringgit from his own savings on his collection.

“However, if there is any individual who wants to hold a history exhibition, I am ready to take part in such events to provide an interactive learning experience,” he said.