Noodles (and a shop) that disappear in minutes

Naturally, the prefecture is home to many udon restaurants, but one shop stands out, even by the standards of Kagawa. The shop keeps to an irregular schedule, and when it does open, it shuts down just 10 minutes later. Even the shop’s name, Juppun Udon (10-Minute Udon), references the brevity of its hours.

The shop was launched six years ago by the head of a noodle factory in the town of Kotohira. He used his lunchtime to prepare and serve udon to people in the factory’s neighbourhood.

Those dishes went viral on social media as “mythic udon”, and now fans flock to the shop from inside and outside the prefecture.

Shortly before noon on October 27, 2022, steam from boiling noodles filled the second floor of the factory, which is part of the Osyoya noodle company, a manufacturer of udon noodles for gifts and other purposes.

Then a sign reading “Open for 10 minutes” was put up at the entrance of the factory, and customers began to make their way upstairs. Ten minutes later, they left.

The shop makes only 35 servings a day. Some people start standing in line very early in the morning to get one of the numbered tickets that are handed out starting at 9am. 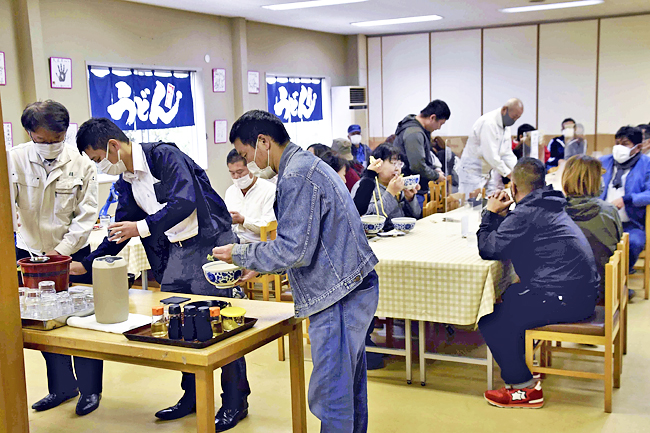 Shinobu Miyawaki, 49, has been regularly visiting the udon shop for more than five years.

“The flour mix changes each time, so I never get tired of the udon no matter how often I come here,” Miyawaki said. “If their hours were any shorter, I wouldn’t be able to finish the noodles. They must be the shortest (hours) in Kagawa.”

Preparing the noodles in the kitchen was factory head Takeshi Yamashita, 49. Yamashita comes from Takamatsu and became an udon maker after finishing high school.

Once his employer closed the shop, he started working at Osyoya at the age of 38 and subsequently became the factory head.

Osyoya does not run any udon restaurants. It only manufactures udon and sells the noodles at souvenir shops and other retailers.

Yamashita felt a growing desire to see the faces of customers eating udon manufactured at the factory, and he brought the matter up with the company’s senior executive, Hideto Yamaji, asking him whether it would be possible to serve udon at the factory.

At first, Yamaji would not agree to any such project, but when Yamashita made a further plea, saying, “I’ll do it myself during my lunch break,” the senior executive said, “If you are that serious” and permitted him.

The shop’s 10-minute time limit is an inevitable consequence of having to provide the service during the factory’s lunch break, considering the time required for preparation and cleanup.

The shop’s restrictions also explained why it can’t open during the factory’s busy periods.

When the shop first started, the seating area for customers was just a corner of the factory’s store and the benches outside the factory, and there were days when no one came.

“It made me incredibly happy if just one customer told me, ‘It was delicious,'” Yamashita said.

The shop’s reputation grew through word of mouth. After a year of serving up noodles, a TV show featured the shop.

The shop kept an irregular schedule, to begin with, but since the beginning of the coronavirus pandemic, Yamashita has also avoided serving udon on weekends and holidays, to prevent crowding.

Last year, the shop has opened only seven times. The difficulty of getting a bowl of udon at the shop has spurred its popularity, and people now said it is the most difficult eatery to get into among all the udon shops in the prefecture that keep people lined up to dine.

The shop serves three types of udon noodle bowls: hot, cold and “kamadashi”, or “straight out of a boiling pot”. The dishes come in four sizes – small, medium, large and extra large – and are priced between JPY200 and JPY400.

“My aim is not to make a profit,” said Yamashita, who donates what he earns to charities, such as those supporting children with allergies.

“There are many customers who buy our products that say they do so ‘because that factory head makes the noodles,'” Yamaji said.

“At first, I opposed the idea. But now the whole company supports him.”

“The shop’s open for only 10 minutes, but I want to serve bowls that bring excitement to our customers,” Yamashita said.

The shop’s next open day and the hours for the day are announced on its Twitter accountabout a week in advance.