The decline in the oil and gas sector in 2021 was due to lower production of crude oil, natural gas, and liquefied natural gas (LNG).

Meanwhile, the increase in the non-oil and gas sector was driven by the rise in subsectors such as wholesale and retail trade, non-oil and gas manufacturing and business services. 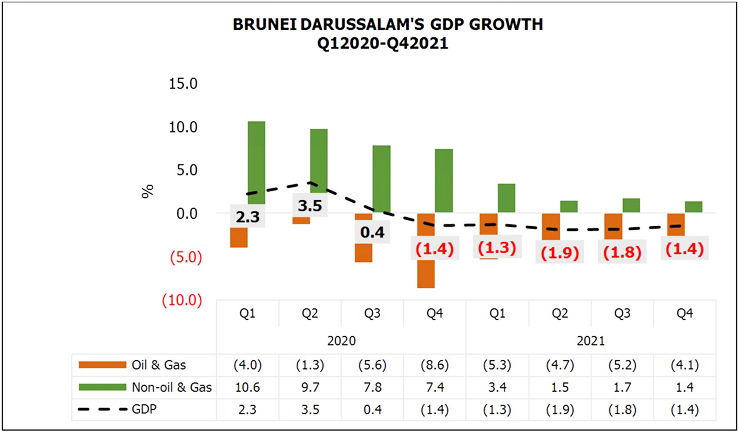 However, the non-oil and gas sector continued to show positive developments despite the country facing the second wave of COVID-19. Finance, air transport and non-oil and gas manufacturing were among the subsectors that showed improvement in the Q4 2021.

The air transport subsector also increased in Q4 2021, in line with an increase in the number of arrivals and departures of air passengers as entry and exit from the country have been permitted according to the conditions set by the Prime Minister’s Office.

The expansion of the non-oil manufacturing subsector corresponded to an increase in food manufacturing and construction material production.

In addition, the agriculture, forestry and fishery sector also continued to show encouraging performance since the second quarter of 2020.

In Q4 2021, this sector has increased by 6.1 per cent due to fishery and forestry production activities. An increase in the fishery subsector was in line with the rise in the capture industry for small-scale and commercial-scale fisherman activities. The increase in sawn timber production was the major contributor to the growth in the forestry subsector.

However, this sector’s contribution to GVA is still at a low level of only 1.1 per cent compared to the oil and gas sector at BND56.3 million.

By expenditure approach, a decline in GDP growth in Q4 2021 was mainly due to a decrease in the domestic demand by six per cent, driven by a reduction in gross capital formation for both government and private.