NEW YORK (AFP) – On a hot Sunday afternoon in New York, the epicentre of the United States (US) monkeypox outbreak, a long line of men aged 20 to 40 wait for a vaccine to protect themselves and their loved ones against the virus.

With its rows of tables and chairs and stacks of medical equipment, the vaccination centre – a high school in Bushwick, Brooklyn – is reminiscent of a vaccine spot for COVID-19, a virus for which New York was also the US epicentre.

Everyone who spoke to AFP while waiting in line said they felt lucky to have gotten an appointment, as New York lacks doses.

On Friday, 9,200 time slots became available on the city’s dedicated website at 6pm. They were all gone in seven minutes.

Three days earlier, site traffic was so high that the page crashed.

“It was frustrating, largely because especially with COVID, you’d think that we would have more of a structured process or vaccine rollout,” Aidan Baglivo, 23, told AFP. “There just wasn’t really anything.”

The city of more than eight million people saw monkeypox infections climb last week, with 461 cases recorded last Friday since the US outbreak began in May. 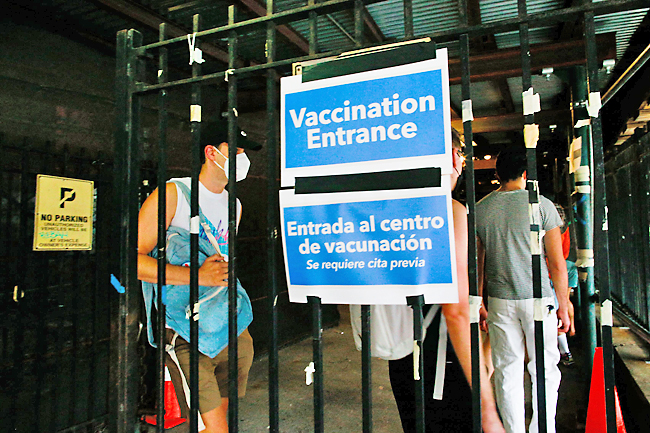 That number is up from 223 cases last Monday.

Baglivo, a data analyst, noted that people who are the most connected on social media have the highest chances of getting a vaccine appointment.

Robert, who declined to give his last name, told AFP he sat at his computer refreshing the website “like a crazy person” until he got a slot.

“This shouldn’t be an issue because there’s already a vaccine, and it (the rollout) should be… more efficient to prevent it from becoming more of an issue,” said the 28-year-old. Neither his partner nor his best friend have been able to get a vaccine.

“Every additional day where there’s not more people being vaccinated is a bummer.”

Anyone can catch monkeypox, which spreads through close physical contact.

Monkeypox is characterised by lesions on the skin – which can appear on the genitals or the mouth – and is often accompanied by fever, sore throat and pain in the lymph nodes. It usually clears up on its own but can be extremely painful.

New York, on the US East Coast, has already either administered or scheduled 21,500 vaccines and hopes to speed up the process, promising more than 30,000 jabs for the whole state.

But due to a lack of doses, the Bushwick site was not expected to re-open yesterday.

In line at the Bushwick site, fitness instructor Leroy Jackson has another concern.

Access to appointments for minorities and underprivileged groups is even more limited, he pointed out.