KYIV, Ukraine (AP) – The head of NATO expressed worry that the fighting in Ukraine could spin out of control and become a war between Russia and NATO, according to an interview released on Friday.

“If things go wrong, they can go horribly wrong,” NATO Secretary-General Jens Stoltenberg (AP; pic below) said to Norwegian broadcaster NRK. “It is a terrible war in Ukraine. It is also a war that can become a full-fledged war that spreads into a major war between NATO and Russia,” he said.

“We are working on that every day to avoid that.”

Stoltenberg, a former prime minister of Norway, said in the interview that “there is no doubt that a full-fledged war is a possibility”.

The Kremlin has repeatedly accused NATO allies of effectively becoming a party to the conflict by providing Ukraine with weapons, training its troops and feeding military intelligence. 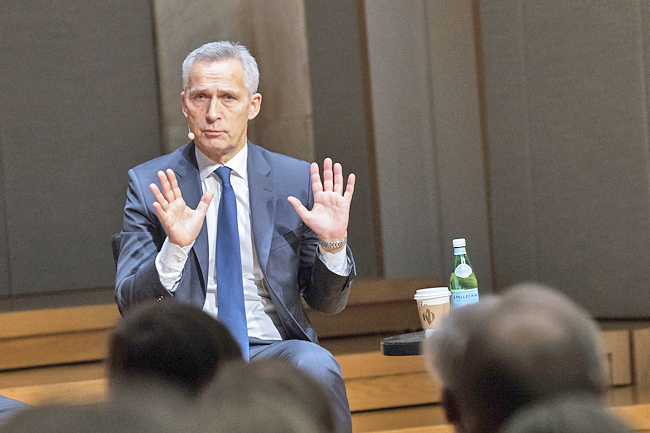 In comments that reflected soaring tensions between Russia and the West, President Vladimir Putin suggested Moscow might think about using what he described as the United States (US) concept of a preemptive strike.

“Speaking about a disarming strike, maybe it’s worth thinking about adopting the ideas developed by our US counterparts, their ideas of ensuring their security,” he said.

Ukrainians say they are fighting for freedom against an unwanted invader and aggressor.

British Prime Minister Rishi Sunak spoke to Ukrainian President Volodymyr Zelenskyy by phone on Friday and both “agreed on the importance of preempting Russia’s insincere calls for a cease-fire”, Sunak’s office said. “The prime minister added that the Kremlin needed to withdraw its forces before any agreement could be considered.”

Heavy fighting continued on Friday in eastern and southern Ukraine, mostly in regions that Russia illegally annexed in September.

Ukraine said five civilians have been killed and another 13 have been wounded in the last 24 hours.

“You can best describe those attacks as cannon fodder,” Kyrylenko said in televised remarks. “They are mostly relying on infantry and less on armour, and they can’t advance.”