Mystery of the seas

PENYABANGAN (AP) – It took a broken air conditioner for Tom Bowling to figure out – after nearly eight months of failure – how to breed the coveted pink-yellow tropical fish known as blotched anthias.

Bowling, an ornamental fish breeder based in Palau, had kept the fish in cool water, trying to replicate the temperatures the deep-water creatures are usually found in. But when the air conditioner broke the water temperature rose by a few degrees overnight – with surprising results. “They started spawning – they went crazy, laying eggs everywhere,” said Bowling.

Experts around the world tinker over water temperature, futz with lights, and try various mixes of microscopic food particles in hopes of happening upon the particular and peculiar set of conditions that will inspire ornamental fish to breed. Experts hope to steer the aquarium fish trade away from wild-caught fish, which are often caught with poisons that can hurt coral ecosystems.

Most of the millions of glittering fish that dart around saltwater aquariums in the United States (US), Europe, China and elsewhere are taken from coral reefs in the Philippines, Indonesia and other tropical countries.

Trappers often stun them using chemicals like cyanide. They are then transferred to middlemen and then flown across the globe, ending up in aquariums in homes, malls, restaurants and medical offices. Experts estimate “large percentages” die on the way.

Part of the problem: only about four per cent of saltwater aquarium fish can be bred in captivity, largely because many have elaborate reproductive cycles and delicate early life stages that require sometimes mysterious conditions that scientists and breeders struggle to reproduce. 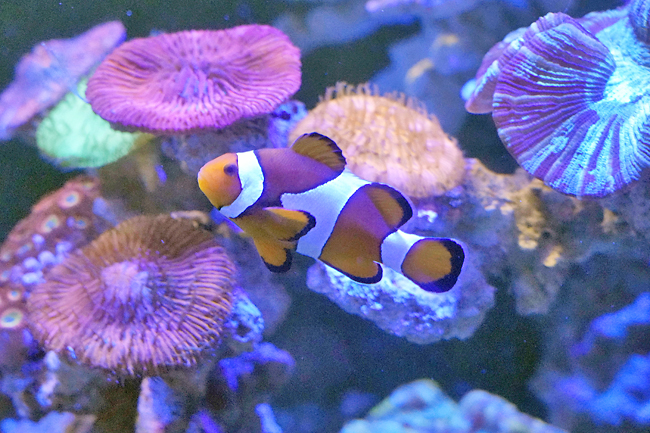 For decades experts have been working to unlock the secrets of marine fish breeding.

“It requires years of investment, research and development, oftentimes to make incremental steps,” he said. And then even longer, he said, to bring newly captive-bred species to market.

“You’ve got to pay attention to all the parameters that will make a fish happy,” said Andersen. “Some species are really gentle, delicate and sensitive to these kinds of things.”

After fish spawn, breeders often find themselves facing the most challenging part of the process: the larval period, which is the time just after the fish hatches, before it develops into a juvenile. The flow of water has to be just right, but they are so fragile they have to be protected from filters and even tank walls.

The first feeding is also crucial, said marine biology professor at Roger Williams University in Rhode Island Andrew Rhyne. During the first days many larval fish don’t have eyes or mouths, instead living off their yolk.

“When they finally do form eyes or mouths it’s so important to have created an environment that allows them to get a first bite of zooplankton so they can get a little stronger and continue to grow,” said Rhyne. “That’s kind of been the magic for all of this.”

Often that first bite is a critical part of the ocean food system that harbours its own mysteries: called copepods, they are microscopic crustaceans that provide vital nutrients to larval fish and are key for breeders around the world.

At the University of Florida Tropical Aquaculture Laboratory in Ruskin – where the blue tang “Dory” fish popularised by the movie Finding Nemo was successfully bred for the first time – associate professor Matt DiMaggio and his students have been working to produce copepods. But even the copepods haven proven to be difficult to raise.

Mort than 10,000 miles away from the Florida lab, on the tropical northern coast of Bali, Indonesia, renowned fish breeder Wen-Ping Su walks between large cement fish tanks, his own zooplankton recipe churning in a circular tank nearby.

Su said he has 10 different keys to success that he’s been developing for nearly two decades. Those keys have enabled him to breed fish that no one else has, including striped regal angelfish and frilly black-bodied, orange-rimmed pinnatus batfish.

But asking Wen-Ping Su if he’ll share details, his answer comes quickly, with his hands crossing to form an X in front of his big smile: “No.”

It’s the same sentiment echoed by Bowling, who pauses when asked about sharing the secrets to his most high-profile successes. “That’s the part I really don’t want to tell you,” he laughed.

Those secrets are their livelihoods. The blotched anthias Bowling bred after the broken air conditioner are listed for USD700 on his company’s website. Fish bred by Su also sell for hundreds of dollars online.

But in the past five years there are some organisations – such as Rising Tide Conservation, a non-governmental organisation (NGO) dedicated to developing and promoting aquaculture – that have worked to promote information sharing, said DiMaggio.

“That’s helped to accelerate the number of species that we’ve been able to raise in during that time and the variety of species too,” he said, highlighting species such as wrasses, butterflyfish and tangs.

Rhyne’s research lab – which includes breeding toothy queen triggerfish and red-striped yasha gobies – has been working to share his research with breeders as well.

But Rhyne and other breeders concede that it’s unlikely all aquarium fish will be raised in captivity because some are just too difficult, while others are so abundant in nature.

And breeding a fish doesn’t guarantee it will make it to or do well on the market, said Rhyne. Captive bred fish cost more, and experts in the fish industry recognise that it will take time to convince consumers should pay more for them.

“How do we market aquaculture fish the way that we market organic foods, you know, and demand that premium price point?” said Andersen, from the Coral Reef Aquarium Fisheries Campaign. “The marketing is really important.”