NICHOLASVILLE, UNITED STATES (AFP) – Trey Mullinax (AFP pic below) sank a 15-foot birdie putt on the final hole yesterday to win the Barbasol Championship for his first US PGA title and capture a berth in next week’s British Open.

The 30-year-old American fired a six-under par 66 in the final round to finish on 25-under 263 and edge compatriot Kevin Streelman by one stroke after 72 holes at Keene Trace, which absorbed nearly four inches of rain on Friday and Saturday.

World number 370 Mullinax, whose best prior finish was a share of second at the 2018 Texas Open, will make his first start in the British Open, which begins on Thursday at St Andrews.

“I just told myself, this is your purpose so commit to it and do it,” Mullinax said. “We were trying to commit to everything we were doing. I stayed focussed for 72 holes.”

Streelman, ranked 129th, birdied 17 to match Mullinax for the lead, and tension was high as they reached the 18th green. Mullinax holed his putt, pumping his right fist twice in celebration.

“I told myself, ‘I’ve been putting great all week, just go for it,’” Mullinax said.

Streelman, a two-time PGA winner whose 208 starts without a victory over the past eight years are the most on tour, had a nine-foot birdie putt to force a playoff, but the ball rolled right of the cup and he settled for second.

“I gave my all,” Streelman said. “Trey and I just battled each other. He’s one of my best friends out here so that was kind of fun as well.

“I’m frustrated. I hit two incredible shots there into the last two holes and hit two good putts. One of them went. One of them didn’t.” 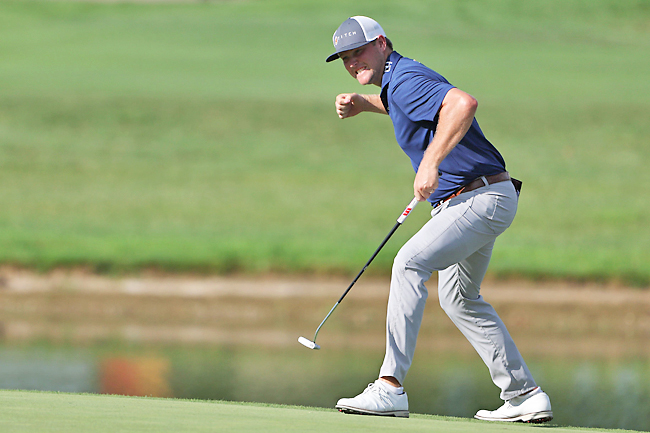