The Language and Literature Bureau (DBP) Library Kampong Pandan began a series of activities starting with a workshop as part of an initiative to promote and disseminate information on the culture and history of Mukun in Brunei yesterday.

The workshop introduced Mukun to residents from the village and beyond, as well as the history and effort by the Kelab Budaya Mukun Selendang Sutera in carrying the heritage for the next generation.

Group manager Norfaizal bin Ismail highlighted this in a speech, adding that their efforts extend across the nation as they had previously conducted a similar workshop in the Brunei-Muara District with plans to conduct more.

He also spoke on the importance of learning about Mukun, especially among the youth, the history of Mukun and how it was adopted from neighbouring countries, and how generations of Mukun performers have continued to shape how it is performed to this day.

The workshop continued with group president Irwan Rino bin Nordin delivering a talk about the origin of Mukun as an act of courtship to now being a form of entertainment, as well as focussing on the melody and poetry that are associated with Mukun.

He also shared the group’s achievements not only in being showcased in media such as television and newspaper but also winning international competitions against Mukun performers from other countries.

Organised by the library in collaboration with the Kelab Budaya Mukun Selendang Sutera, the workshop was held in conjunction with the library’s Empowering Reading Culture Carnival 2022 with activities ranging from workshops to Khatam Al-Quran ceremony conducted over the course of four days, ending on Wednesday. 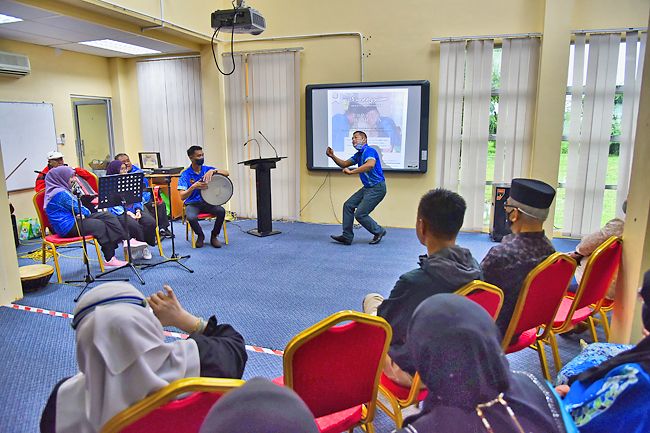