AP – In Mrs Harris Goes to Paris, a middle-aged woman of very limited means in post-World War II London dreams of owning a Christian Dior gown. In 1957, however, at the height of Dior’s New Look renown, this was not a straightforward proposition.

There was no London store or catalogue to order from.

There wouldn’t even be a ready to wear line for another 10 years. Everything was custom made couture. The only way Ada Harris could own one herself, as the title suggests, was to drop in on the House of Dior at 30 Avenue de Montaigne.

The film, which opens in theatres nationwide Friday, is a colourful, romantic fairy tale starring Lesley Manville as Mrs Harris, a war widow who only discovers Dior while cleaning one of her wealthy clients’ homes, and Isabelle Huppert as the snobbish gatekeeper Madame Colbert, who bristles at the idea of a woman like Ada wearing Dior. It is, director Anthony Fabian hopes, a film that will delight and inspire audiences not just for its aspirational qualities but for the dignity with which it treats its heroine.

“I think everyone has an aspiration for something that seems unattainable,” Fabian said.

“We are very ground down by a very complicated time that we’re living in right now, and something that offers the possibility that you can fulfill your dreams is a very uplifting message.”

Fabian had been introduced to the story about a decade ago. He wasn’t familiar with Paul Gallico’s 1958 book (Mrs ‘Arris Goes to Paris) or the Angela Lansbury, Omar Sharif and Diana Rigg TV movie from 1992, but a producer thought of him to direct, and as someone who has lived in both Paris and London, he knew he could bring something unique to the story.

When the rights to the book lapsed, Fabian picked them up and started on his own version of the script, which would elevate the story from just being about a dress to one that’s about a woman who society disregards getting a second chance at life and love. 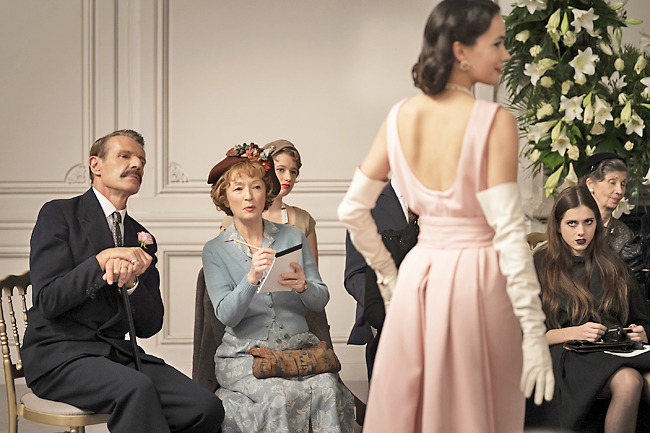 “It doesn’t really explain why Mrs Harris wants this dress, other than in the most frivolous and superficial terms – it had to be more profound,” Harris said. “I wanted to suggest that Ada Harris’ heart is healed by going on this journey.”

But it was all going to hinge on who would play Mrs Ada Harris and Manville was, for him, the perfect combination of character actor and leading lady.

“It is a little bit of a Cinderella slipper of a role,” he said. “It’s not going to fit many people.”

The House of Dior even agreed to help by opening their archives and supplying blueprints for its original townhouse and atelier, which were recreated in detail by the production.

But it would take some postwar scrappiness to bring it to life on a very, very limited budget during the early days of the COVID-19 pandemic, including doing much of the filming in Budapest.

It helped that Fabian was able to enlist some of the top film craftspeople in the world, including costume designer Jenny Beavan and production designer Luciana Arrighi.

Both women are Oscar-winners who met on the set of James Ivory’s Howards End and went on to work together many more times including on The Remains of the Day and Sense and Sensibility.

In the 1960s, Arrighi was a model for Yves Saint Laurent for several years and brought with her an intimate understanding of the world of mid-century haute couture.

“Luci has always had the most divine taste,” Fabian said. “She was the one who said, ‘I think Jenny’s the right person for this.’ It is a bit of a costume designer’s dream. I was able to aim quite high.”

Beavan, who has won Oscars for A Room with a View, Mad Max: Fury Road and, earlier this year, Cruella, had also worked with Manville before and thought Mrs Harris Goes to Paris was “just the most charming story.”

“I just love characters,” Beavan said. “I don’t mind whether they’re cleaners or Dior models.”
But, she said, she was, “Slightly seduced into thinking that Dior would be doing the Dior part of it.”

When Beavan mentioned this after a “beautiful afternoon” exploring the Dior archives and meeting with their chief curator, she was met with a horrified non, non!” Beavan and her team, including a fellow Merchant Ivory veteran John Bright and her Cruella collaborator Jane Law, would be the ones making the dresses.

Physical dresses from that era of Dior are scarce, however, and Beavan had to rely on photos, drawings and several reproductions made in the ‘80s and ‘90s for reference.

The gowns called Dior Diablotine and Miss Dior would be the inspiration behind the scarlet and emerald frocks that catch Mrs Harris’s eye in Paris.

Getting hold of enough fabric was tricky, though. With lockdowns and travel restrictions and zero costume houses in Budapest, they relied on samples in the mail, zoom approvals and friends in Paris to help fit their French cast.

“I felt a lot of pressure because we had so little money to do it all, and yet we were recreating a very high fashion moment. I just wanted to honor Dior.

“I wanted to make sure that they felt what we were recreating was very possible,” Beavan said. “In the end we did make it, Dior approved of it and couldn’t have been more helpful all the way.”