DOHA (AFP) – Morocco head into today’s last-eight clash with Portugal knowing they are only one step away from making history as Africa’s first World Cup semi-finalists, but they face a opposition fresh from scoring six goals against Switzerland.

Walid Regragui’s Moroccans are in uncharted territory after a surprise run which saw them finish top of Group F after beating Belgium and Canada before a stunning victory over Spain on penalties.

The Atlas Lions are only the fourth African side to reach the quarter-finals – after Cameroon in 1990, Senegal in 2002 and Ghana in 2010.

There has still never been a country from outside Europe or South America in a World Cup final, but Morocco want to put that right.

“We’re not going to stop here. We’re going to respect every opponent. But we are going to be very difficult opponents. So why not dream about lifting that trophy?”

Morocco are unbeaten in seven matches since Regragui took over from the sacked Vahid Halilhodzic in August. 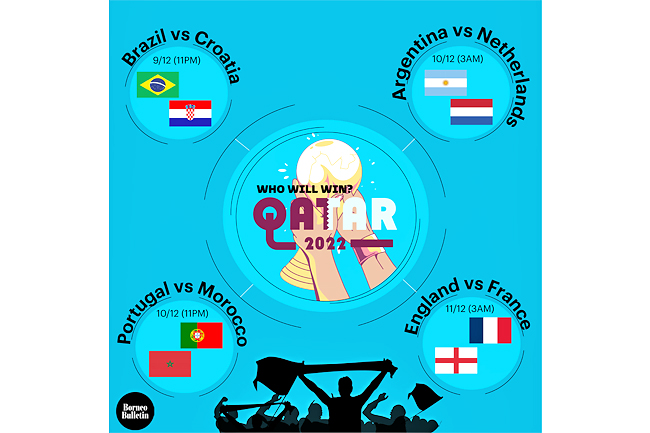 Morocco have overcome several injury problems to get this far in Qatar, with full-backs Achraf Hakimi and Noussair Mazraoui carrying knocks for most of the tournament.

Centre-back Nayef Aguerd hobbled off injured against Spain, while captain Romain Saiss soldiered on despite picking up an injury during extra time.

“Since the start of the competition, we’ve been playing with a team that’s not 100 per cent, that’s why it’s even more extraordinary,” said Regragui.

“We’ve managed to create a family, and we feel that we have a people behind us.”

Spain struggled to create any clear-cut chances against the dogged North Africans but Portugal will be a different proposition after a fluid attacking display against the Swiss.

Coach Fernando Santos took the big decision to drop Cristiano Ronaldo to the bench, but it paid dividends as the superstar striker’s replacement Goncalo Ramos scored a hat-trick in the 6-1 rout.

Portugal are in the World Cup quarter-finals for the first time since 2006, when they beat England on penalties before being knocked out by France.

They beat Ghana and Uruguay in the group stage before losing to South Korea, but without Ronaldo in the lineup, Portugal’s attacking players appeared freer against Switzerland.