KABUL (XINHUA) – Inspired by teachers of a mobile school run in the countryside of south Afghanistan’s Kandahar province, nine-year-old Bashir Ahmad has recently decided to become a doctor in the future.

“The mobile school comes at the right time and brings necessary books to students and teachers who teach us very well,” Ahmad said, adding that he can have a two-hour class every day in the square in front of his village.

For Mohammad Daud, a teacher of the mobile school, after finishing his class at Ahmad’s village in the morning, he has to leave for another immediately under the scorching sun. “We travel about 10 to 15 km from one village to another every day.”

“The mobile school operates in four villages in turn in one day, with 40 to 60 male and female students in each turn,” Daud said.

“We teach subjects from the first grade to the sixth grade, as well as science, math and social science.”

The mobile school, according to its founder Matiullah Weesa, has been covering 1,200 students including boys and girls by eight teachers voluntarily in Kandahar’s remote rural areas to help the children get proper education. 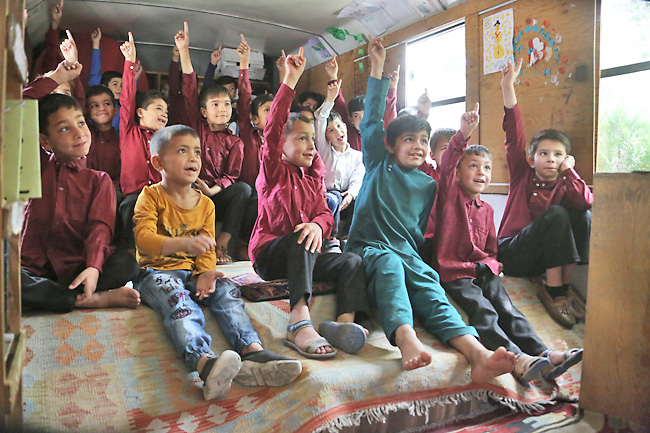 “In addition to providing textbooks we also provide literature books such as novels and stationery for poor children in villages and encourage them to study,” Weesa added.

There is no fixed teaching building for at least 5,000 primary and secondary schools in Afghanistan, where students have to attend classes in the open air, said an official, who declined to be named, from the ministry for education of the Afghan caretaker government.

Afghan children do not have enough access to books, which has prevented them from gaining the ability of critical thinking, said deputy director of a mobile school in Kabul Ahmad Seyyam Barkakati.

More than 3.5 million children including school-aged girls reportedly cannot go to school due to various reasons such as poverty, security threats and cultural barriers in the war-torn Afghanistan, where many people, mostly in the countryside, believe in old-fashioned traditions, opposing girls in school and women working outside.

“We aim to promote literacy, book reading culture, and critical thinking,” said Barkakati, who is trying to change his compatriots’ conservative mode of thinking by running the mobile school.

“It is necessary for their brain and it is very important for children to think outside the box.”