ADELAIDE, AUSTRALIA (AP) – Daniil Medvedev (AP, pic below) defeated Miomir Kecmanovic 6-0, 6-3 to reach the quarter-finals of the Adelaide International. The former world number one – now ranked number seven – had an easy time yesterday for his third victory in three tries against the Serbian, who is ranked number 29.

Top-seeded Novak Djokovic, who has won 30 straight singles matches on Australian soil, will play today for his place in the quarter-finals and a possible matchup against Medvedev in the semi-finals.

Medvedev is seeded number three and will face fellow Russian Karen Khachanov for his spot in the semi-finals.

“Really happy to be through, happy with my level and looking forward to my next match,” Medvedev said. “Miomir is a tough opponent, high-rep player. There are no easy guys left in Adelaide, not sure there were even in the first round.”

Khachanov, a semi-finalist at last year’s US Open, defeated Jack Draper of Britain 6-4, 6-2 to advance. On the women’s side of the combined ATP-WTA tournament, Aryna Sabalenka and Marketa Vondrousova are set to meet in the quarter-finals after both won matches yesterday. 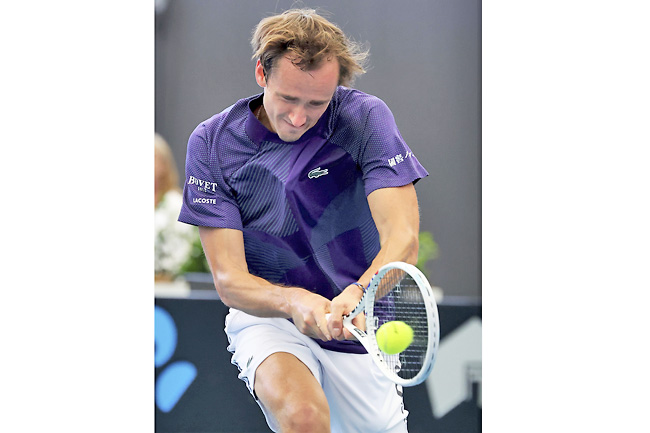