AP – Mali’s prime minister lashed out on Saturday at former coloniser France, the United Nations (UN) secretary-general and many people in between, saying that the tumultuous country had been “stabbed in the back” by the French military withdrawal.

In the same remarks, Abdoulaye Maiga (AP; pic below) praised the “exemplary and fruitful cooperation between Mali and Russia.”

Maiga was directly criticising UN Secretary-General Antonio Guterres by the fourth sentence of his speech to the General Assembly.

And he slammed what he called France’s “unilateral decision” to relocate its remaining troops to neighbouring Niger amid deteriorating relations with Mali’s two-time coup leader Colonel Assimi Goita. While it was Goita and his allies who overthrew a democratically elected president by military force two years ago, Mali’s prime minister repeatedly referred to a “French junta” throughout his speech.

“Move on from the colonial past and hear the anger, the frustration, the rejection that is coming up from the African cities and countryside, and understand that this movement is inexorable,” Maiga said. 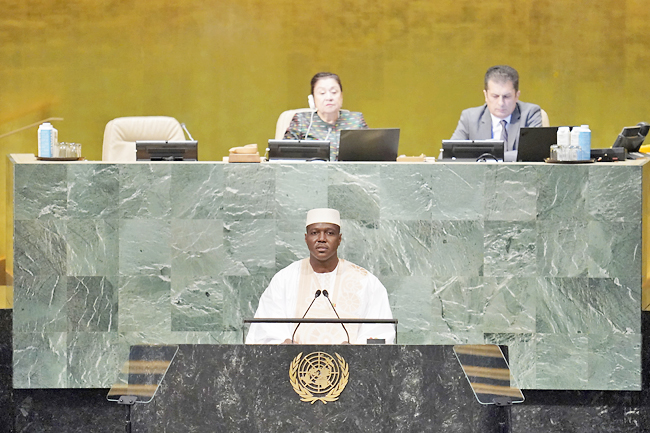 “Your intimidations and subversive actions have only swelled the ranks of Africans concerned with preserving their dignity.”

France intervened militarily in 2013, leading an effort to oust extremists from control of the northern Malian towns they had overtaken.

Over the past nine years, France had continued its presence in a bid to stabilise the country amid repeated attacks by insurgents.

The French departure has raised new concerns about whether those militants will again regain territory with security responsibilities now falling to the Malian military and UN peacekeepers.