After having started their careers in styling and dressing musicians as well as television personalities for magazine editorials and television appearances in 2015, Co-Creative Directors Zulhelmi Kamaluddin and Fikri Afif combined their creative ideas to give birth to premium fashion brand ‘Bilang’.

“We pride ourselves to be a brand that is fearless and bold yet modest and elegant. We love to infuse traditional or heritage elements into our designs with metaphorical storytelling at the core of our DNA,” shared Zulhelmi.

Fikri recounted how they initially began with fashion styling for their online magazine in 2015 through working with well-known regional brands in Malaysia and Brunei, attending fashion shows, producing fashion campaigns for other designers and getting to know the ins-and-outs of the fashion business in the region. It was during the COVID-19 pandemic when their business, options and logistics became very limited that the fashion label was born.

They started with ready-to-wear or off-the-rack pieces for their collections, but as the brand grew and the co-creative directors got to know their clientele better, they began producing made-to-measure or custom pieces.

“Since we only had styling experience and not producing experience, we had to start from the very beginning,” said Zulhelmi. 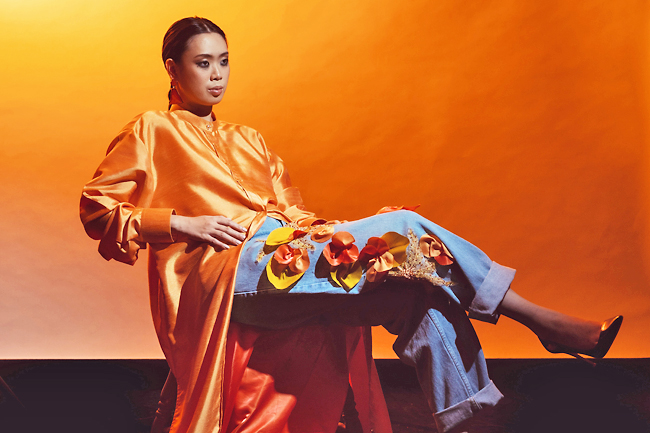 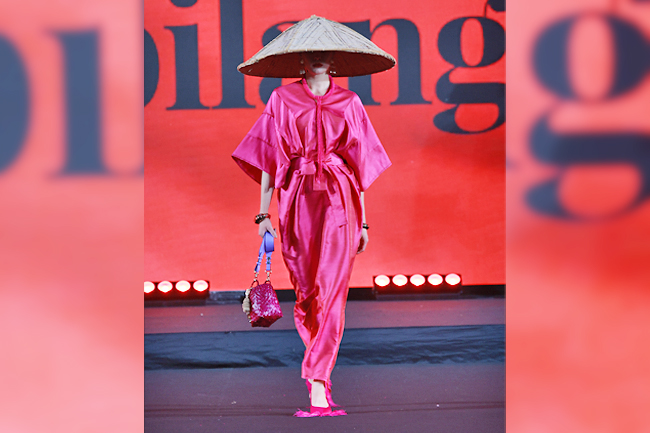 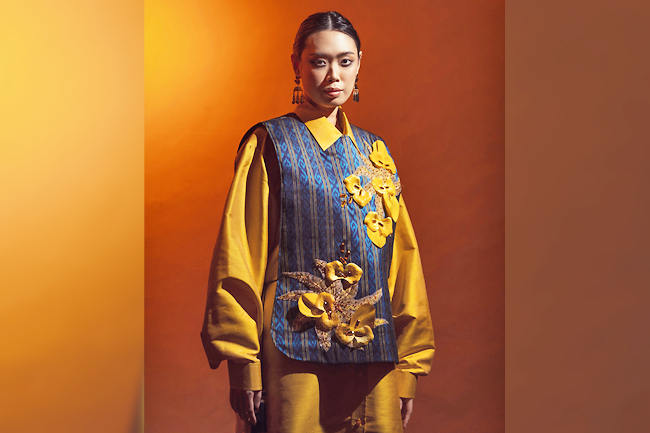 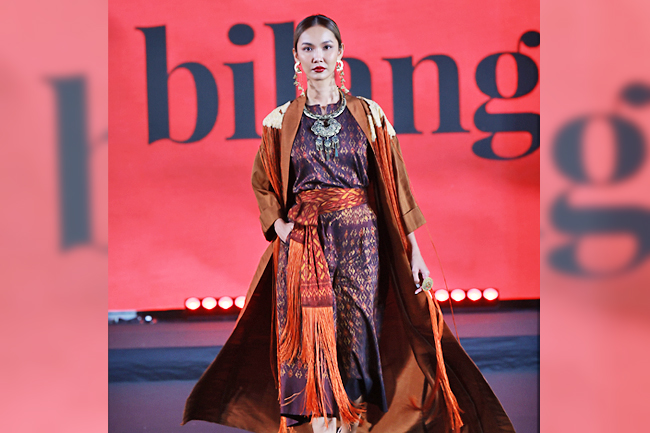 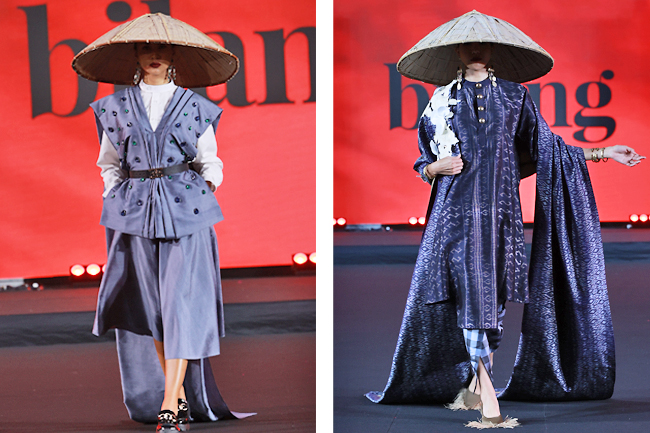 He shared that they began learning how to sew, making use of all the resources they had to stay afloat and sustain the business.

“The first look we designed was for Ezah Hashim during her appearance at the Anugerah Express E-Hits in early 2020. That’s when we also released our first capsule ready-to-wear Raya collection.

“Since then, we have experimented with different silhouettes and fabrics which led to our current DNA,” added Zulhelmi.

The fashion brand was invited to showcase a dress at the Asia-Pacific Economic Cooperation (APEC) Summit Gala Dinner along with 20 other international designers from participating countries in mid-November in Bangkok, Thailand.

Their ensemble was made up almost entirely of Thai silk fabric and chronicles the idea of amity or synergy interpreted through an exquisite harmony of colours – blue to represent water and fluidity, and yellow symbolising friendship.

The silhouette of the yellow shirt dress reflects the grace of silky water, the Simpur petal embellishments against the blue vest paint a picture of flowers floating on the expanse of a river.

As water sustains all life, it nurtures the flower to steadily bloom, in the same way friendships need sustenance to inspire strength and resilience. Speaking on the experience, Zulhelmi said it was truly unexpected as they were initially invited to participate at the 3rd Thai Silk Fashion Week in December.

“Along the way, the organiser suggested that they would also showcase one of our designs at the summit. It was a surreal experience!” said Zulhelmi.

Fikri added that it was such a huge milestone for the brand, not only to represent the country, but also to be seen by world leaders and delegates.

“We wanted the dress to be a teaser to our new collection which was inspired by Padian, but since we were not allowed to have literal political representation in the design, we used a metaphorical approach by having Simpur – Brunei’s national flower – petals to represent Padians, rowing their boats along the Brunei river with the wave patterns of the blue vest depicting that,” said Fikri.

During the 3rd Thai Silk Fashion Week held from December 6-11 at Siam Paragon, Bangkok, the local brand assembled with other international designers across 60 countries for their very first showcase at the eagerly awaited event.

Fikri shared that they showcased six looks at the fashion show, excluding the one made for APEC which was only displayed at the exhibition area.

He explained that they had about four months to prepare, from sketching to waiting for the fabric exclusively provided by the Thai government to be couriered to Brunei, tailoring and actual completion of the dresses.

Inspired by Padian, Reminiscence is a medley of 12 outfits, of which seven are made up almost entirely of Thai Silk for the fashion week and that are carefully curated to encapsulate the spirit and nostalgia of Padian. A combination of vibrant and muted colours were selected with adornments ranging from beautiful coloured gemstones and tassels were incorporated to create looks that are intertwined with each other and, of course, styled with the iconic huge hat made of Nipah leaves called Siraung Bini, normally worn by Padians during the old days.

For Bilang, the art of storytelling has been second nature. For many centuries, it was a mundane occurrence to see sightings of women on boats selling provisions from one house to another in Kampong Ayer. Although, by the early 20th Century, glimpses of them began dwindling to a point of extinction around the 1980s.

When asked about their thought processes prior to showcases in choosing what they want to showcase, Zulhelmi said that it goes back to the brand DNA of telling stories through fashion.

Fikri said they always knew they wanted to do a ready-to-wear collection this time, and all of the pieces are an interpretation from our previous signature silhouettes but still showcasing the beauty of Thai silk, making it more wearable and versatile.

“Although it’s a RTW (Ready-To-Wear) collection, every ensemble is embellished with a combination of rhinestones, 3D floral appliqué and fringe to give it some textures and movement.

“As for the colours, we took inspiration from the vibrant tones in nature; from blue to pink and gold; as well as details associated to Padians, giving every look a distinct personality.”

As Bruneian fashion designers, Zulhelmi believes their struggles are similar to those experienced by other creatives in the country, which is gaining the trust, support or confidence of locals towards local talents or brands.

“We are still experiencing it now, but I believe that is normal, especially for a new brand like ours,” he added.

Fikri noted that to have been recognised and chosen for the events in Bangkok was such a big opportunity and came at the perfect time for them to put their brand on the map.

“Fashion is a small industry in the country, and that could be the reason why not many people acknowledge its existence. But in recent years, we saw some improvements especially in the entertainment industry where celebrities have started to hire stylists and fashion designers for their shows and TV appearances. In a way, that has helped to promote our local talents.”

They both hope to see the pool of fashion designers from Brunei succeed abroad, as other local fashion designers have already proven that it can happen as long as they work hard, plan and prove that they have what it takes to make it big overseas.

“We have a lot of amazing local talents in this country – not only fashion designers, but other creatives that make up the fashion industry. It’s a tough race out there. So, we have to know what makes us different as a brand and how we fit in. But, to achieve international recognition, support has to come from home – locals. Only then, others would follow suit,” said Zulhelmi.