THE WASHINGTON POST – This recipe has its start with a gift card to an online food delivery website provided by my employer. I had the Helmand, a local restaurant specialising in Afghan cuisine.

Choosing what to order? I leaned on The Washington Post’s review of the restaurant from 2003 to help narrow down my options.

Luckily, I was nudged to try aushak, a dish the restaurant describes as “ravioli filled with leeks, served on yoghurt and topped with ground beef and mint.” It was simply sublime.

I am an absolute allium fanatic. Sauteing onion at the beginning of recipes is when I most often get the “wow that smells delicious” comments from anyone near my kitchen. Aushak might be your path to realising your affinity for alliums.

The rest of the recipe comes together in relatively quick steps. A saute of scallions and leeks mellows out their bite and brings out their natural sweetness.

Top the boiled dumplings with a meat sauce spiked with coriander and paprika, plus a refreshing and zingy seasoned yoghurt, and you’re left with a deeply complex, unexpected crowd pleaser.

Now, you’re thinking that sounds like a lot of work. So here’s my advice: Read the recipe from start to finish and see what you can break up into smaller segments. The filling and meat sauce can be made a day ahead and refrigerated.

I do, however, recommend clearing your calendar for the afternoon and diving in. You’ll be surprised at how meditative the process of hand-filling dozens of dumplings can be. 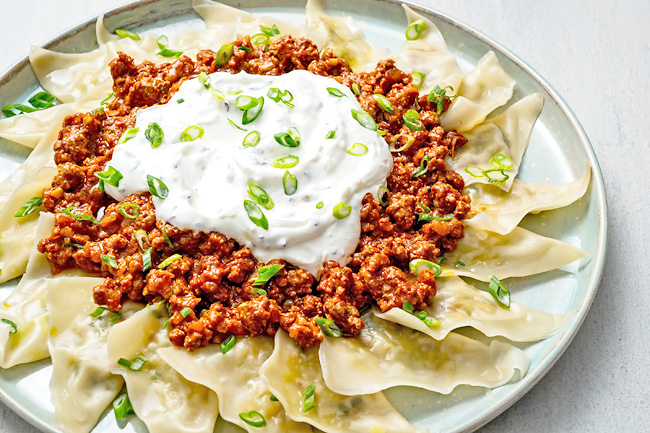 Aushak has a simple clarity in its treatment of ingredients, but the preparation is probably best characterised as “project cooking” meant for a weekend or a holiday.

Take your time filling the dumplings and creating a hearty meat sauce and yoghurt topping, and be rewarded with a showstopper suitable for your most deserving (and discerning) guests.

Make Ahead: The yoghurt and meat sauces can be made up to three days ahead.

– Half teaspoon fine salt, or more as needed

For the meat sauce

For the yoghurt sauce

Make the dumplings: In a large skillet over medium heat, heat the oil until shimmering. Add the leeks and scallions and cook, stirring, until softened, about five minutes.

Season with salt and crushed red pepper flakes, and cook, stirring, until most of the moisture has evaporated, another five minutes.

Taste and add more salt, if needed. Remove from the heat and let cool completely.

Place a dumpling wrapper on the countertop and add about one tablespoon of the leek mixture into the centre of the wrapper. Dab your index finger in the water and dampen the edges of the wrapper.

Fold in half diagonally to form a half triangle (or half circle for round wrappers), pressing the edges together to seal and being careful to squeeze out any pockets of air.

Set the formed dumplings on the prepared baking sheet; cover with a kitchen towel until ready to use. Repeat with the remaining wrappers and filling until you run out of one or the other.

Make the meat sauce: In a large skillet over medium-high heat, heat the oil until shimmering.

Add the tomato sauce, bring to a simmer, reduce the heat to medium-low and cook until the meat is cooked through and the flavours meld, about 20 minutes. Makes about three cups.

Make the yoghurt sauce: In a small bowl, stir together the yoghurt, garlic, dried mint and salt. Taste, and adjust the seasoning, if desired. Makes about one cup.

When ready to serve, fill a three-quart pot three-quarters of the way with salted water and bring to a rolling boil over high heat. Carefully drop in six dumplings and cook, stirring occasionally to avoid sticking, until the dumplings float to the top and appear translucent, about five minutes.

Using a spider or slotted spoon, transfer the dumplings to a serving platter. Repeat with the remaining dumplings.

Top with meat sauce and garnish with yoghurt sauce and serve family-style.