RENO, NEVADA (AP) – Add Burning Man to the list of plaintiffs challenging one of the growing number of ‘green energy’ projects in the works in Nevada, United States.

Environmental groups, Native American tribes and ranchers are among those who’ve filed lawsuits over the past two years seeking to block individual projects.

They say that while they support reductions in greenhouse gas emissions to help combat climate change, the commercial developments on public land in Nevada were approved illegally and will have their own environmental and cultural consequences.

Now, the group that stages perhaps the most famous counterculture event in the world is among those facing off against the United States government over geothermal exploration in the Nevada desert where 70,000 people known as “Burners” gather every summer. 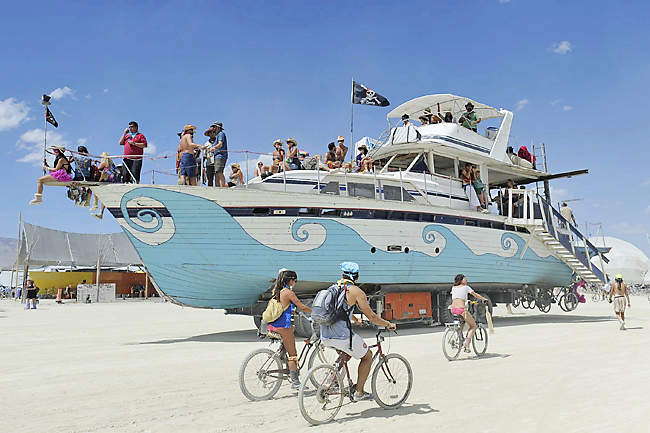 Friends of Nevada Wilderness, Friends of Black Rock/High Rock Inc and two local residents of Gerlach joined the suit that says the agency’s environmental review of the exploration project ignored potential harms that could come from a large-scale geothermal project.

“Ormat’s exploration project will lay the foundation for turning a unique, virtually pristine ecosystem of environmental, historical and cultural significance into an industrial zone, and permanently alter the landscape,” the lawsuit says.

The Bureau of Land Management has no comment on the lawsuit, agency spokesman Brian Hires said in an email to The Associated Press.

The drilling is planned within the Black Rock National Conservation Area, home to the festival where themed tent villages and avant-garde art exhibits sprout from a barren desert basin that was once the floor of an ancient lake.

Clothing is optional, but participation is required at the celebration of art, music and sometimes anarchy itself as ageing hippies, Silicon Valley executives and other curiosity seekers gather around drum circles and pagan fire rituals.

Or, as the lawsuit says, where attendees “over the course of eight days, camp and participate in a unique experimental community”.

“The ethos and culture of the event are rooted in the 10 principles of Burning Man”, including “radical inclusion”, gifting, self-expression, communal effort, civic responsibility and “leaving no trace”, the lawsuit explains.

The lawsuit said Ormat has attempted to evade analysis of the geothermal power plants’ potential negative effects on the environment by segmenting the project, which limits BLM’s review to only the first stage of its plans, exploration.

“However, this first stage merely confirms where the resources are located to inform future industrial scale geothermal energy development,” the suit said.

“Once the exploration project begins, it will be impossible to stop the effects of the entire geothermal production project.”

The exploration project calls for 19 test wells and pads, associated facilities and 4.5 kilometres of improved and new access roads.

The proposed wells would be adjacent to a number of unique hot springs that are relied upon by the local community for tourism.

The springs also are ecologically significant because they’re “interconnected with each other, the ecosystem and the pristine landscape of the region”, the suit said. “After participating in the public process and seeing no movement on our concerns, we filed this lawsuit to help ensure the impacts from the proposed project are minimised, and that Ormat is a good corporate citizen in this environmentally sensitive, economically vulnerable area of northern Nevada,” said Burning Man Project’s general counsel Adam Belsky.

Thomsen said in an email that Ormat “looks forward to prevailing in the lawsuit and continuing its contribution to Nevada’s green energy, zero emissions future, which will offset some of the copious amounts of fossil fuels the Burning Man Project annually emits in the Black Rock Desert”.