A civil engineering student from Universiti Teknologi Brunei received a brand new Toyota Wigo after she picked the grand prize envelope at the closing night of the 26th Consumer Fair at the International Convention Centre (ICC) in Berakas, yesterday.

Nur ‘Atikah Nazirah binti Mohammad Faizal was in disbelief when she found out that she had won a brand new car.

“I can’t believe I won. I got the lucky draw entries from the food I bought at the fair,” she said.

Nur ‘Atikah Nazirah shared that she will keep the car for herself, to be used to travel to the university and make food delivery.

Meanwhile, the second prize of a Gintell massage chair went to Siti Nurul Safiah Maun and the third prize of an air purifier went to Haji Bahar bin Haji Japar. 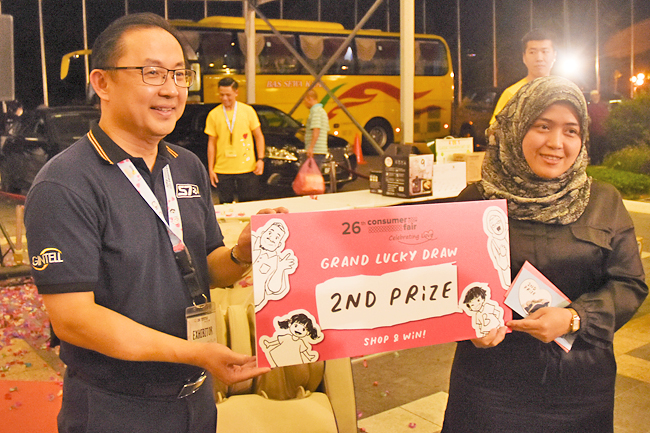 Fifty finalists were shortlisted for the grand draw.

The bi-annual event took place over the span of five days, from January 11-15. Themed ‘Celebrating Love’, the fair aimed to bring together Bruneians with its wide array of products.

Similar to previous installments, the fair told a story of family-oriented cartoon characters – Babah, Babu, Boboi and Alai – projected with a light sense of humour of how the family looked forward to going to the Consumer Fair.

The 26th Consumer Fair has become a hub, with its assortment of products and services, along with fun-filled activities.