THE WASHINGTON POST – An 18th-Century baroque basilica awash in pink and surrounded by vineyards. Reconstructed prehistoric stilt-house dwellings above the water. A medieval castle perched atop a hill. A museum devoted to zeppelins, plus an actual zeppelin high in the sky.

Those were the sights during our first 12 hours at Lake Constance. In between, we encountered towns, lakeside parks, lively cafes and shimmering blue water.

It’s easy to see why the 39-mile-long lake, which straddles Germany, Austria and Switzerland, has long been a popular European resort area. (If you want to check off a fourth country, Liechtenstein is only about 30 minutes away by car).

With more than a dozen marked bicycle routes and boosted by the surge of electric bikes, the region has also become one of Europe’s most popular cycling destinations. That’s how my wife, Selina, and I explored the area, following the signposted 168-mile Lake Constance Bike Route, which roughly circumnavigates the lake.

The lake, located about an hour northeast of Zurich, is fed by the Rhine River and is made of two linked parts: the larger Obersee (upper lake) and the Untersee (lower lake). Its outline, frequently seen on tourist signs, improbably resembles a scuba diver. (There are dive spots in the lake, too). Germany claims most of the shoreline – 107 miles – and Lake Constance is commonly referred to by its German name, Bodensee (pronounced Boden-zay).

Historic resort towns, most with public beaches, ring the shoreline, while farmland, orchards and vineyards lie just beyond. The closer views are hilly, with the towering Alps visible in the distance in certain spots. On the water, ferries crisscross from one town to another, interspersed with sailboats and other recreational vessels. 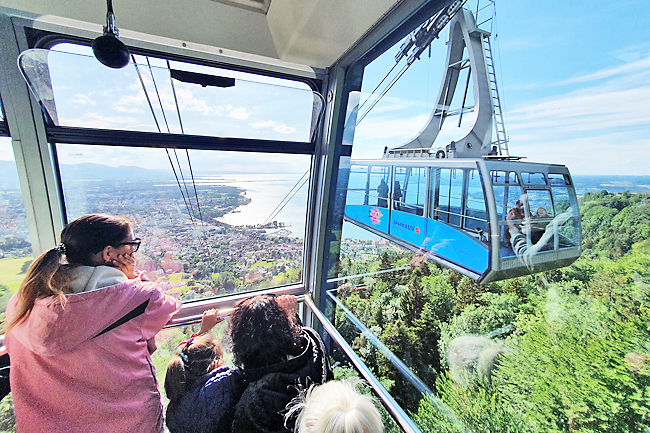 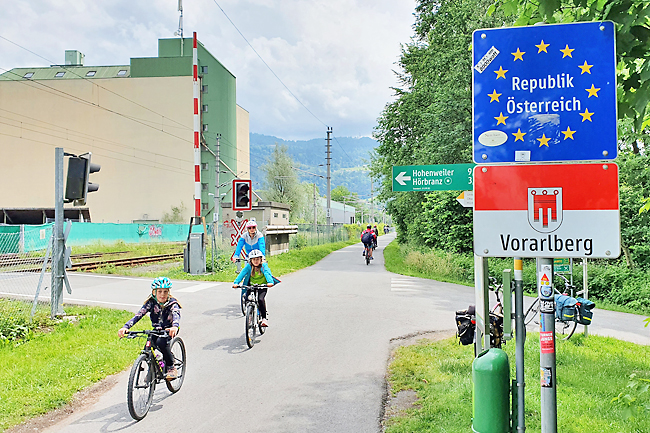 Some visitors park themselves in one town and use public transportation, including ferries, buses and trains, to reach the rest of the lake and beyond.

Depending on how much you plan to see and do, one option that can save time and money is to buy a Bodensee Card Plus, which includes entrance to more than 160 attractions around the lake, plus some transportation.

As for the cycling, although the sections near the shoreline are flat, the route otherwise has more ups and downs than I had expected. Overall, the cycling felt safe, though routes were not always separated from traffic. Surfaces included pavement in urban areas, crushed gravel in parks and dirt roads through forests.

We brought our own bikes from our home in the Netherlands, but there are plenty of rental shops in the region, as well as a long list of organised and self-guided bike tour outfitters.

We are usually in the minority when arriving at a hotel by bicycle. Here we blended right in. On one day of our ride, a sunny Saturday during a holiday weekend in late May, there were so many bikes on the paths that it felt like a cycling event.

We were among the few English speakers visiting the area. So if you’re looking for a European destination with few Americans, this is one. With that in mind, most signs were in German, and many Germans we encountered spoke very little English, even at hotels.

We followed the bike route clockwise, starting from the town of Radolfzell, on the western end of the lower lake.

After pedalling along the shoreline and passing miles of fruit orchards and strawberry fields (many with tempting farm stands), we reached the Birnau Basilica. The pale-pink jewel built atop a hill around 1750 is so large that we later spotted it from different vantage points as we circled the lake.

Thirty minutes later, we went even further back in time at the Pfahlbauten, or pile dwellings, a United Nations Educational, Scientific and Cultural Organization (UNESCO) World Heritage site and one of 111 locations of prehistoric stilt houses found around the Alps. Based on excavations, the village was reconstructed and can be toured. Child-friendly exhibits make this a great family stop, and it also abuts a large waterfront park.

We had to skip the famous Meersburg Castle to reach the town of Friedrichshafen before the Zeppelin Museum closed for the day. Ferdinand von Zeppelin, who grew up on the lake, invented the zeppelin and started building airships in Friedrichshafen in the late 1890s. Most of us know of the zeppelin through the Hindenburg, which burst into flames in New Jersey in 1937. But before that, hundreds of passenger trips were completed on the dirigibles. The museum documents this fascinating form of air travel. The centrepiece is a reproduction of the 108-foot-long passenger section of the Hindenburg, down to its toilets and decorative wall panels.

The next day, we sped past several lovely lakeside towns to reach Lindau, which bills itself as the ‘Bavarian Riviera’. Its ‘Altstadt’, or old town, is on an island with a pedestrian-only centre and lively harbourside. We climbed the lighthouse at the end of the harbour for a fantastic view of the lake and the colourful buildings lining cobblestone streets.

Heading farther east, we saw our first clear outlines of snow-covered mountains and finally crossed the border into Austria.

In Bregenz, we hopped aboard the city’s famed Pfänderbahn cable car, which takes six minutes from the heart of the city to reach Pfänder, a 3,490-foot peak.

At the top, we could look out over a panorama of three countries and a sparkling blue lake.

Clouds obscured the 240 Alpine peaks one can supposedly see on a clear day. Still, the views were majestic.

We checked Switzerland off the list the next day on our way to the biggest city on the lake: Konstanz, Germany, with about 85,000 residents. The vibrant university town on the lake’s northwest shore boasts a large historic centre with timber-framed buildings, some with strikingly painted facades.

Konstanz is also known for its two neighbouring islands, Mainau and Reichenau. Mainau, a small island with an admission fee, is a popular attraction, especially for families. Its gardens and arboretum were thankfully less manicured than I’d expected and were quite beautiful. A baroque castle punctuates the eastern end near the ferry harbour.

On the west side of Konstanz sits Reichenau, another UNESCO World Heritage site. During the Middle Ages, its Benedictine monastery, founded in 724, became one of the continent’s most important spiritual centres and produced splendid illuminated manuscripts and frescoes.

Three remaining churches can be visited, each with its own small museum. The most popular is St Georg, known for its elaborate fresco-covered walls.

Today, Reichenau is also famous for its vegetable farms. Thanks to a mild climate and a sprawling irrigation network across the 1.7-square-mile island, farmers here harvest four times yearly. Family greenhouses virtually cover the island. Some island families also fish for a living, catching mostly whitefish, perch, pike and trout. We had lunch at the picturesque Georg’s Fischerhütte, one of a few small family-run fish restaurants on the island, where we feasted on unadorned grilled whitefish straight from the lake.

Although the number of Konstanz’s painted facades could fill an art gallery, the ones we saw the next day in Stein am Rhein, Switzerland, counted toward a full museum’s worth.

The town, home to about 3,500 people along the Rhine, has passed down its folklore in vivid, richly detailed artwork on centuries-old buildings, many of them half-timbered structures.

Bustling shops and cafes flank the cobblestone main street, but the architecture steals the show.

From Stein am Rhein, you can take a boat down the Rhine to Schaffhausen, Switzerland, which is near Rheinfall.

At about 500 feet wide and 75 feet high, the falls are among the largest and most powerful in Europe. As we approached by bike, we could feel the wind gusts before we could hear or see the water. Although “it’s no Niagara”, as several friends mentioned, it does have an attraction I can’t imagine seeing in the United States: Tourist boats take visitors through churning waters to a set of stairs that lead to a viewing platform atop a tall rock in the middle of the falls.

Another water attraction we loved in Schaffhausen is the Rhybadi, or Rhine River Bath, an enclosed pool constructed in the river that has been there for more than a century.

On our last day of riding, we finally stopped at a farm stand for strawberries. I’d been eyeing the plump, ripe berries all week, but we didn’t have a good way to transport them. We got them safely to the car and ate them like candy on the way home, sweet reminders of our ride around Lake Constance.