The recent renovation of the Hassanal Bolkiah National Stadium includes the replacement of 30,113 stadium chairs.

In the spirit of Climate Action Week, a showcase of the upcycled stadium chairs is on display at the Yayasan Sultan Haji Hassanal Bolkiah Complex.

The chairs were painted by volunteer artists and some were further upcycled by local carpenters.

Local volunteer carpenters Bazli Tajudin, Haziq Khalid and Haadi Razak of Groove by Semanga said they got to know about the project through a friend at the Public Works Department (JKR) who invited them to volunteer. “We tried to shape our project into a small floating boat with seats in commemorating the Kampong Ayer lifestyle,” said Bazli.

This is the first time the trio participated in this type of project under Groove by Semanga, and they feel that it is a good opportunity for locals to showcase their talents or artwork. “If there are any future collaborations with other carpenters or other industry opportunities, I hope this opens us up to that,” said Haziq.

Carpenter Mohamad Hadi bin Haji Mohamad Roslan of Kucing Kayu said he initially did not know about the project until a meeting was called in the Brunei Carpenters Group via WhatsApp inviting local carpenters. 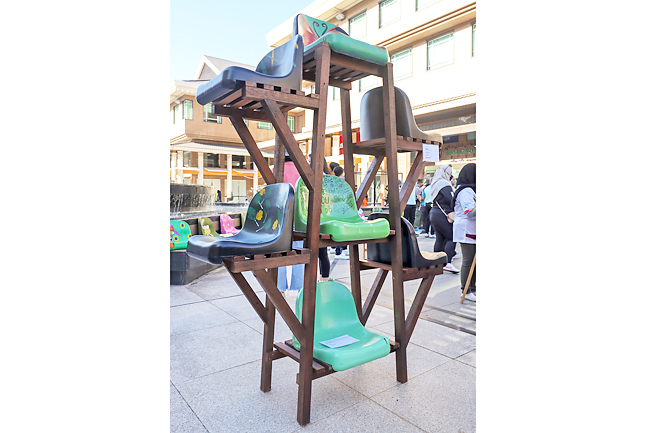 After joining, Mohamad Hadi began researching and working on the design. He said he wanted to create something that people could relax and swing on, combining materials such as metal and wood for the chairs. “I wanted to show that carpentry isn’t limited to just wood,” He said.

He hopes that through the project, people will see that used items should not be necessarily thrown away, and instead have it re-used and repurposed.

“If today’s youth want to pursue something new and beneficial, they shouldn’t give up half-way, but instead put their all into it.

“Youth also shouldn’t put all their eggs in one basket – instead, dive into many other things especially to gain income,” he said.

Visitors Iffah and Hadirah said the project is quite innovative.

They believe that Brunei should do more of these projects because of the overwhelming amount of trash around.

“It’s a good way to recycle and bring awareness to recycling. With art and the like, it’ll give the topic of this issue a bit more awareness on how to be more engaging with the public,” said Iffah.

The upcycled stadium chair pieces are for sale to which a portion of the proceeds will go to charity.