Living with knee pain in your 40s

CNA – If you’re already in your 40s, you probably don’t go a day without uttering or thinking “ow”. From squatting down to retrieve a dropped object to climbing the stairs, the source of your daily discomfort is likely your knees – the most common age-related musculoskeletal problem.

And it is also likely that you’ve tried a few options – knee braces, joint supplements, pain-relieving creams and patches, strengthening exercises and even alternative medicine such as acupuncture – to try and take the edge off.

But the one thing you probably haven’t given much thought to is knee replacement surgery. That’s something associated with elderly folks – not younger individuals like yourself, right? You’re still playing sports or jogging occasionally and there is still pep in your step.

You aren’t entirely wrong to think that. The orthopaedic specialists that CNA Lifestyle spoke to concur that the typical age of patients who require knee replacements is over the age of 60. However, there are rare exceptions to the rule.

“My youngest patients in the past five years were between 45 years old and 49 years old,” said Adjunct Assistant Professor Kelvin Tan Guoping, Head of Service (Adult Reconstruction) at Tan Tock Seng Hospital. He added that about 10 per cent to 20 per cent of patients who have knee pain are in their 40s.

Those in their 40s are also a minority at Ng Teng Fong Hospital, who make up less than five per cent of the knee replacement patients, according to Adjunct Assistant Professor Wang Lushun, Head and Senior Consultant at the hospital’s Division of Hip and Knee Service. 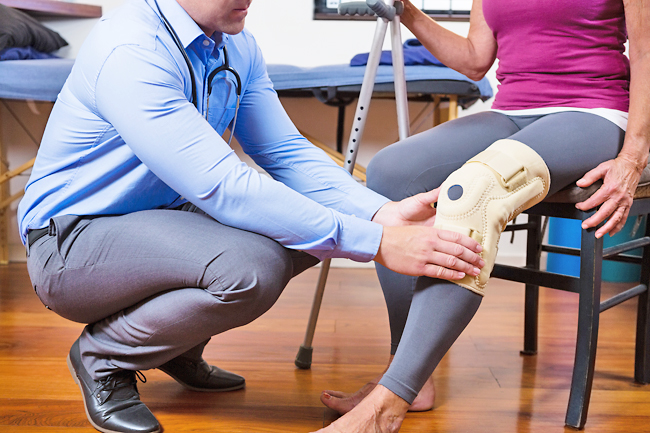 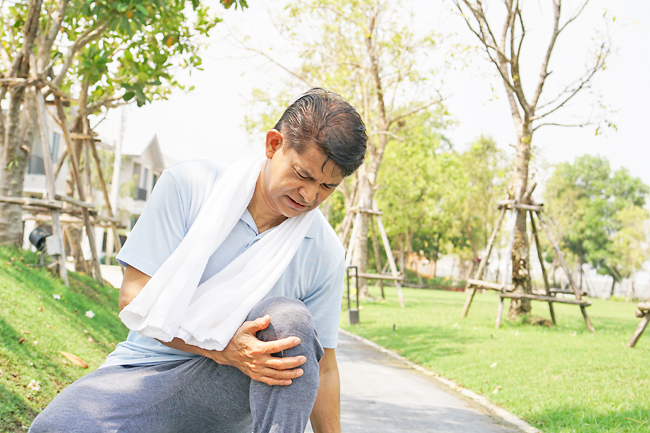 WHAT CAUSES KNEE PAIN? HOW COMMON IS IT?

The most common cause of knee pain is osteoarthritis, which refers to the wearing of the knee cartilage.

The other causes include systemic conditions such as rheumatoid arthritis. For these patients, both knees and even other joints hurt, said Dr Kelvin Tan.

Knee pain is more common than you think. If you see someone hesitating at the stairs, that’s likely it. “Eleven per cent of our population have painful knee arthritis,” said Dr Wang.

In fact, there are nearly as many patients in their 40s with knee pain as those over 60 years old – or at least in the outpatient clinic at Alexandra Hospital, according to associate consultant with Orthopaedic Surgery Dr Melvin Tan.

Dr Kelvin Tan agreed that “their pain scale is slightly lower, at about two to three” but emphasised that the pain intensity can vary widely due to the different causes of the knee pain.

Even if this group of knee pain sufferers does require surgery, it is “generally for sports injuries such as meniscus tears and ACL (anterior cruciate ligament) tears”, said Dr Wang.

While all is currently well and good – or at least bearable – will you have to consider knee replacement surgery 10 or 20 years down the road? It depends on a few factors, said orthopaedic doctors.

Add to that revenge exercise and we’re increasingly becoming a nation of creaky knees, said Dr Wang, who has recently seen an uptick in sports-related knee injuries in those in their 40s.

But what’s the big deal, you ask. You’re still relatively young and your body can heal itself, right? Hold that assumption because the knee injuries you sustain now could set you up for osteoarthritis down the road, said Dr Melvin Tan. “These injuries may result in the instability of the joint, which generates wear and tear of the cartilage over time.”

Dr Wang agreed, “Sometimes, a previous injury can lead to accelerated arthritis on one side”. He also said that osteoarthritis can occur in one or two knee joints in varying degrees. “Usually, both knees will have arthritis, but this can still vary in severity for each knee.”

As for why women are more prone to osteoarthritis than men, the exact reason is not clear, said Dr Chua, although “most forms of osteoarthritis are not hereditary”. “Some theories revolve around varus or the natural bow-legged alignment of female patients,” he said.

Other possibilities that put women at a disadvantage could be “menopause and its accompanying hormonal changes” as well as the “anatomical differences between men and women”, said Dr Melvin Tan.

“But it can be more severe in one knee than the other for some patients, while others can have equally severe osteoarthritis in both knees.”

But the factors that doctors can say with certainty are age and obesity. “The main reason for the overall rising incidence of knee pain is due to the rapidly ageing of our population and obesity rates: 20 per cent of our population would be above 65 years old in 2030; obesity was estimated to be 15 per cent in 2018,” said Dr Wang. “After age 40, the rate of knee pain, knee injuries and arthritis increase sharply.”

IS THERE ANYTHING YOU CAN DO NOW TO PREVENT KNEE SURGERY IN THE FUTURE?

If you’re thinking you shouldn’t be exercising to spare your achy knees, think again.

One, “existing medical literature shows that knee cartilage wear-and-tear does not correlate to the degree of physical activity”, said Dr Kelvin Tan. Two, you need to work off the extra calories to ensure you don’t gain excessive weight, which can add to your knees’ burden, he said.

“The main thing is to take good care of your knees by avoiding traumatic or sporting injuries,” said Dr Kelvin Tan. “Adequate warm-up, stretching and especially good quadricep strength can all be protective of your knees.”

Having said that, take care that you don’t damage your joints during exercise as significant knee injuries (such as ligament, menisci and cartilage trauma) sustained in your 40s – along with inflammatory conditions such as rheumatoid arthritis or gout – are risk factors that “can lead to knee replacement surgery at a younger age than expected”, said Dr Wang.

As for supplements such as glucosamine, all the experts have the same opinion: Their effectiveness hasn’t been proven. “Glucosamine is not effective in slowing down the wear and tear of knee cartilage,” said Dr Chua. Dr Melvin Tan has a similar view, “Glucosamine supplements are increasingly purported to be ineffective in treatment of osteoarthritis”.

What about collagen, turmeric and curcumin supplements? They “do not have good quality evidence and are not routinely offered by knee specialists worldwide”, said Dr Wang.

“International guidelines also do not recommend the routine prescription of knee joint supplements.”

Contrary to what some may think, knee replacement surgery doesn’t involve removing the entire knee joint – that is, bone, cartilage, tendons and ligaments – and replacing it with a manmade one. “The word ‘replacement’ is a misnomer,” said Dr Chua. “The more appropriate term is knee resurfacing.”

To understand what Dr Chua means, let’s examine the knee cartilage – the most common site of osteoarthritis. This smooth, white tissue that covers the ends of the bones where they meet to form the knee is about six millimetre thick in some areas. It ensures the smooth movement of the knee as well as absorbs shock during weight-bearing activities such as walking and jogging.

When the cartilage is damaged or worn down, the bones will rub and grind against each other. Cartilage does not contain nerves, so it can’t transmit pain per se. But the friction created between the bones can lead to a whole lot of painful problems.

In instances where the cartilage does manage to regenerate a small amount of new tissue known as bone spurs, the growth may be irregular and bumpy – and create another source of knee pain when the bones grind against the uneven cartilage during movement. So, the “resurfacing” that Dr Chua mentioned earlier refers to the surfaces of the bones. He likened the process to a dental crown, A one-centimetre thickness is first removed from each of the two surfaces of the bones. Then, the surfaces are “capped” with a metal implant, he explained.

As for the difference between a partial and total knee replacement surgery, we’ll first have to understand knee anatomy.

Added Dr Melvin Tan, “A total knee replacement to resurface the worn-out cartilage is the most commonly performed surgery.

“However, the degeneration may also occur predominantly in a single compartment – most commonly, the medial compartment of the knee joint. For this group of patients, partial knee replacement is an ideal option.” If both knees require surgery, doctors typically schedule a different date for each joint, usually a few months apart, said Dr Kelvin Tan.

This is to allow for the patient to recover the strength and function of the operated leg, so that it is able to support the other leg after the next surgery.

WHAT ARE THE SIGNS THAT YOU NEED KNEE REPLACEMENT SURGERY IN THE FUTURE?

When the knee pain gets so unbearable, it limits your daily activities and no amount of painkillers and conservative treatments such as physiotherapy and weight loss help, that is a sign you might need surgery, said Dr Kelvin Tan. Usually, the pain occurs at the front of the knee, and is chronic and severe, added Dr Chua.

“Ultimately, an assessment by the specialist, and open discussion between the patient and the physician is required before deciding if knee replacement surgery is advisable.”