His two sons and most of his fellow villagers have migrated to a nearby urban settlement but Angchuk is determined to herd his flock of fine cashmere-producing goats in the treeless Kharnak village, a hauntingly beautiful but unforgiving, cold mountainous desert.

The 47-year-old herds 800 sheep and goats and a flock of 50 Himalayan yaks in Kharnak.

In 2013, he migrated to Kharnakling, an urban settlement in the outskirts of a regional town called Leh but returned a year later, not because his old home had become any better, he said, “but because the urban centres are getting worse and there are only menial jobs for people like us”.

Nestled between India, Pakistan and China, Ladakh has faced both territorial disputes and the stark effects of climate change. 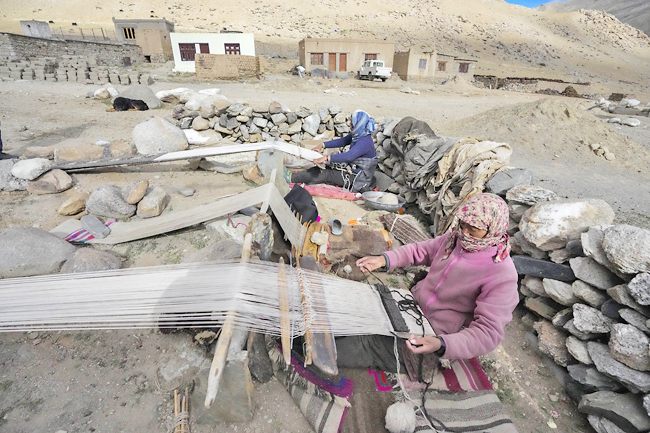 Thousands of Ladakh nomads, known for their unique lifestyle in one of the most hostile landscapes in the world have been at the heart of these changes, compounded by border conflict and shrinking grazing land.

The changes have forced hundreds to migrate to mainly urban settlements, while others work to make it a more habitable place.

Angchuk’s sons didn’t return – they don’t want to be shepherds, he said – and settled in Leh.

One became a construction contractor and the other works at a travel agency, part of the region’s burgeoning tourism industry.

With 300-plus days of sunshine, the desert is in the rain shadows of the Himalayas and receives only about 100 millimetres of precipitation annually.

At an altitude of 4,750 metres, temperatures can fall to minus 35 Celsius during long winter months. But it’s getting hotter.

There is no word for mosquito in the local Ladakhi language, but the region has lots of these insects now, said Sonam Wangchuk, an engineer working on solutions for sustainability at his Himalayan Institute of Alternative Ladakh.

“These are all coming with the viability of climate for them,” he said.

Ladakh’s thousands of glaciers, which help give the rugged region its title as one of the water towers of the world, are receding at an alarming rate, threatening the water supply of millions of people.

“This year we had an unprecedented melting of glaciers,” said leading glaciologist and earth scientist Professor Shakil Romshoo.

Romshoo said his team has been studying seven glaciers in the Kashmir and Ladakh Himalaya for nine years but “this year shows the maximum ablation”, referring to the amount of snow and ice that has disappeared.

The melting, experts said, has been exacerbated by an increase in local pollution that has worsened due to the region’s militarisation.

Black carbon or soot from the burning of fossil fuels on the glaciers absorbs sunlight and contaminates waterways, threatening the region’s security of food, water and energy.

The pollution is “a huge environmental onslaught”, engineer Wangchuk said. “Most of it is due to heating shelters that can be easily replaced by non-carbon-based heating systems.”

“It’s not just any little conflict, it’s much more than that and whoever wins we all lose.”

Herders said with access to the usual breeding and birthing grounds blocked by militaries on either side, newborn goats and sheep are perishing in the extreme cold of higher elevations.

Shepherds roamed these pasturelands atop the roof of the world along the unmarked borders with China for centuries where the harsh winds cause the goats to grow their super-soft wool.

Cashmere takes its name from disputed Kashmir, where artisans weave the wool into fine yarn and exquisite clothing items that cost up to thousands apiece in a major handicraft export industry.

“None of the other products get as much revenue as what they produce and they are the true generators of wealth in Ladakh,” Wangchuk said about Kharnak nomads.

The nomads live a gruelling life and follow a strict round-the-clock routine.

They milk and shear their animals twice a day, maintain stone-walled pens, weave carpets, collect and sun-dry manure for fire and cook food.

Shepherds also shuttle their animals from place to place more often than usual in search of greener grazing areas.

But there’s almost no health care, school or a proper irrigation system.

“It’s a whole year work here, no holidays. Even if you’re sick you’ve to tend to animals,” Angchuk, the nomad, said.

“In a decade or so I think there won’t be any Kharnak nomads although our people will be around. We’ll be history.”

Authorities say they’re doing everything they can to stop the flight of nomads.

Today the village has solar panels for electricity, government-built prefab huts and water taps. Some parts have telecommunication coverage. But the herders said it’s not enough.

Leh district head of sheep husbandry department Tundup Namgail said all facilities notwithstanding, the nomads need to be “lured back on practical terms, not by romanticising their life”.

The “only way to keep them there is to improve their profitability. Make them rich somehow”, he said.

Other solutions are emerging. Ice stupas, an artificial glacier made by villagers and named after a type of Buddhist structure, are becoming an alternate water source.

In winter, villagers store water in the form of conical-shaped ice heaps that dribble down as the temperature warms. In the region’s Kulum village this method has partially worked.

Some eight out of 11 families in the farming village migrated to other areas after a catastrophic drought followed deadly flooding in 2010 and dried up Kulum’s water.

A decade later villagers and a team of environmental activists, including Wangchuk, formed an ice stupa up in the nearby mountain.

Last year, some families returned as a trickle of water from the man-made glacier irrigated some patches of the village field.

Still, experts said the climate change-induced flash floods and droughts have disrupted the hydrological system of many villages.

“It’s a kind of blessing in disguise that lesser people are doing farming now,” Wangchuk said.

“People who are not farming are in a way helping those who are farming by making available the little water that now comes.”

Kharnak herder Paljor Tundup nevertheless worries he could be the last generation of shepherds in the region.

“Our children don’t want this life,” he said as he picked up a hank of wool to pass on to his daughter weaving a carpet nearby.

“Honestly, we also don’t have much to argue with them in favour of this kind of life.”