THE STAR – We found them in the market-bought choy sum, ranging from the size of a bean to one as large as my thumb.

Most days there were no snails in the veggies that had been treated with pesticides. I’m sure that, if not for my parents’ sharp eye, the snails would’ve been cooked until they shrivelled among the leaves.

We put them in a plastic container with fresh choy sum and sliced carrots, and waited.

There were around five snails. It was quite interesting and not at all boring to watch them inch over every centimetre of their new habitat (including crawling across the lid upside-down), probing with their eyestalks at the surfaces.

The most fascinating thing we noticed was the trail of clear slime they left where they went.

Research has proven it: The mucus gastropods secrete possesses great beautifying benefits, moisturising and clarity of skin among them. 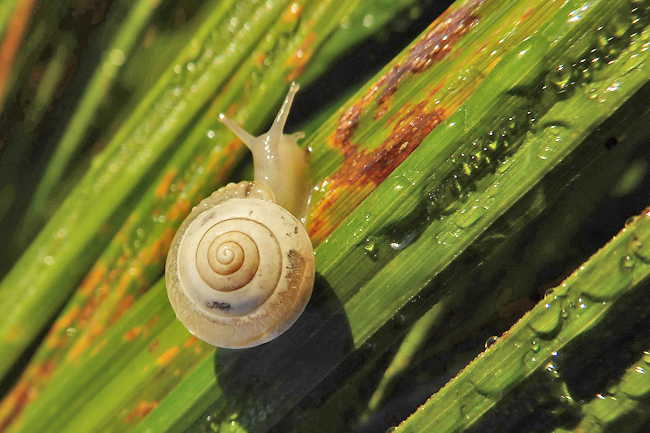 We joked that we’d make a profit by collecting the slime for beauty products.

At first none of them approached the offerings, but slowly, they climbed onto the choy sum and nibbled on the leaf.

Just like before, you knew where they’d been simply by looking for the tiny holes. The carrots were harder, but they succeeded anyway.

I think they liked it.

We wondered if snails were blind. We tested this by putting our fingertips against the plastic, right on top their eyestalks. They shrank back. So, not blind, but their vision is severely limited, and they rely on their olfactory senses to navigate their surroundings.
One of us posed the pertinent question: “What species are they?”

We found out that they were regular garden snails, whose scientific name is Cornu aspersum.

Their spiral shells were a soft brown, banded with darker stripes.

They moved at a snail’s pace (excuse the pun), obviously. Interestingly, their quiescence times during hot season and winter are known as aestivation and overwintering respectively, meaning it goes into dormancy, similar to hibernation.

Then another question arose.

In Asia, apple snails are eaten, mainly for their juicy flesh.

The breeding of edible snails is called heliciculture. Archaeological evidence has presented snails as a delicacy of ancient times, particularly in Greece and Rome, and people even cultivated them in pens called cochlea.

As a month went by, we began noticing the growing intimacy between the two biggest snails, unnamed but known as “Big One” and “Big Two”, and their unusual physical ritual.

Number One and Number Two had mated.

Snails are hermaphrodites – they can produce both female and male reproductive gametes. Soon, Number Two laid some eggs. They were sticky, translucent white blobs clumped together on the side of the container.

I was excited. I’d finally get to see baby snails! Unfortunately, they failed to hatch and had to be cleaned away.

It’s quite therapeutic to watch snails. You can learn a lesson from them too. It’s no good rushing – you might as well go slow and steady and enjoy the fruits of your labour.

The snails, when considering the food, would shy away from it first but gradually come to choose it over starvation. Common sense reigns in the gastropod world, it seems.

After a few months, a smaller snail died, but was soon replaced by two others we found in fresh, pesticide-free choy sum.

We buried the unfortunate one in a plant pot with soil, as it seemed appropriate.

Now there are only five snails in attendance, enjoying a lettuce leaf.

Strange as it is, they’re all part of the family and accounted for!