PARIS (AFP) – Swedish paleogeneticist Svante Paabo, who won the Nobel Medicine Prize on Monday for using DNA to reveal the link between humans and Neanderthals, drew early inspiration from his Nobel laureate father.

However Paabo later learnt that his father had been living a “double life”, and his existence had been kept a secret from his father’s other family.

Paabo, 67, was awarded the medicine Nobel for a long list of achievements including sequencing the Neanderthal genome for the first time and discovering the existence of a distant human relative called the Denisovans.

He was born in Stockholm in 1955 to Estonian chemist Karin Paabo and Sune Bergstrom, a biochemist who won the Nobel Medicine Prize in 1982.

In his 2014 memoir Neanderthal Man: In Search of Lost Genomes, Paabo wrote that he gained inspiration to study medicine at Sweden’s Uppsala University from his father, who had previously been a medical doctor. 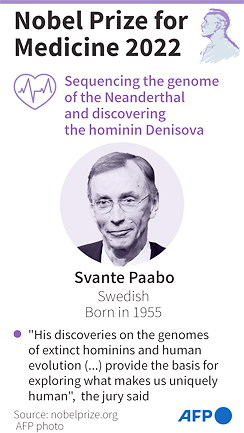 Later he learnt that his father “had two families, one of which did not know about the other”, he wrote.

“I had grown up as the secret extra-marital son of Sune Bergstrom,” Paabo wrote, adding that he had “only occasionally” seen his father as an adult.

Paabo also followed in his father’s footsteps by studying biochemistry, earning a PhD at Uppsala University for using DNA research to study a protein of adenovirus, common viruses which cause cold-like symptoms.

But Paabo had long been fascinated with mummies and “could not quite shake off my romantic fascination with ancient Egypt”, he wrote in his memoir.

The crossover of his medical research using DNA and preoccupation with mummies put him on the path that would become his life’s work.

“Could it be possible to study ancient DNA sequences and thereby clarify how ancient Egyptians were related to one another and to people today?” he asked in his book.

“Such questions were breathtaking. Surely they must have already occurred to someone else.”

Finding that they had not, Paabo sought his own answers.

It proved a difficult task, because there are only trace amounts of DNA left in ancients remains.

He first made international news in 1985, when he published research that found a DNA fragment in the mummy of a 2,400-year-old child.

Paabo then turned his focus toward Neanderthals when he was recruited by Germany’s Munich University in 1995.

A year later, he managed to sequence some mitochondrial DNA from a 40,000-year-old piece of Neanderthal bone.

He then became the head of the genetics department at the Max Planck Institute for Evolutionary Anthropology in Leipzig, Germany.

He accomplished the “seemingly impossible task” of publishing the first Neanderthal genome sequence in 2010, according to a statement from the Nobel Assembly.

The research surprised by the scientific world by showing that Neanderthal genomes are still present in one to four per cent of humans from European or Asian descent.

“We find traces of their DNA everywhere,” Paabo told AFP in 2018.

Also in 2010, Paabo and his team revealed the existence of Denisovans, an extinct human relative, just by sequencing the DNA from a 40,000-year-old finger bone.

Only a year before these breakthroughs were published, Paabo developed potentially life-threatening blood clots in his lungs.

While researching his illness, “to my amazement I stumbled upon references to my father’s work in 1943”, Paabo wrote in his memoir.

His father had “elucidated the chemical structure of herapain”, the drug “which had perhaps saved my life”, he wrote.