JADAA CAMP, IRAQ (AFP) – Awatef Massud is longing to reunite with her Iraqi family after years spent in Syria, but first she must do time in a vetting camp to ensure she has no links to extremists.

The 35-year-old mother of five fled to neighbouring Syria in 2014 to escape violence at home after the Islamic State (IS) group swept across swathes of Syria and Iraq.

For four months now, since her return to Iraq, she has been living in the Jadaa camp, a compound near the northern city of Mosul presented by the authorities as a “rehabilitation” centre for those coming back from Syria.

All the returnees were transferred from Al-Hol camp in northeastern Syria, which houses displaced families but also relatives of IS extremists, including foreign nationals.

Massud is adamant that her husband was killed by IS. But she admits that her in-laws “were once part of the group”.

“We left (Iraq) because of the terrorism. They (IS) made us leave our houses, they forced those who refused to join them to leave,” she said. 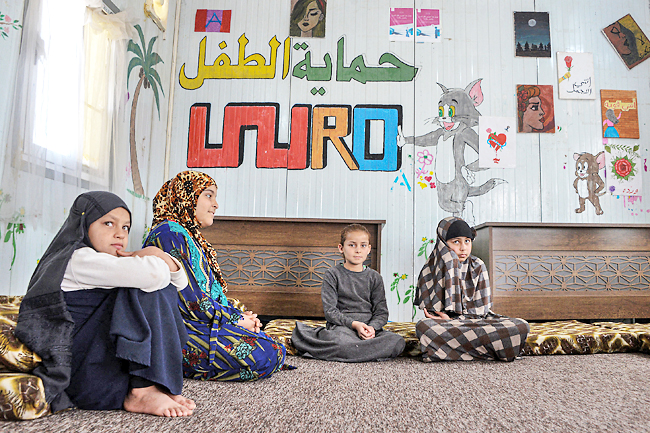 Massud spent three years in Al-Hol with her five children.

Two of them are now with her in Jadaa, where they attend a public school, while the other three stayed behind with her in-laws at Al-Hol.

“I am waiting for their return so that I can reunite with my family” in the western Anbar region, she said.

More than 450 families live in Jadaa, a sprawling camp lined with blue tarp tents, where visitors must present an official permit to security guards before they are allowed in.

The camp is located south of Mosul, once an IS bastion before the group was defeated in 2017.

Some of the women questioned by AFP acknowledged links to IS, through their husbands or a relative, but others denied having had anything to do with the group.

As they await processing, the families try to keep a semblance of a normal life with the help of activities sponsored by UN agencies and NGOs.

Some women learn to sew while teenage girls attend classes about puberty. Younger boys and girls mingle in a small playground.

Camp administrator Khaled Abdel Karim told AFP that only “a very limited” number of families at Jadaa had been influenced by IS ideology. “This camp was not set up to detain or isolate the families, it is a transit stop,” said Abdel Karim.

Experts, he said, help families overcome the “shame linked to IS”, while others assist them with preparing the documents they need to get through the vetting process and resume life outside the compound.

“Through our daily contacts, we see that our activities are not being rejected,” the official told AFP.

“When it comes to the mixing between men and women, or the type of clothes they wear, there is nothing to signal extremist thinking,” he added.

Until they are allowed to go back home, Jadaa residents receive family visits four times a month. But before they can return to their hometowns, tribal elders must hold council and give their approval.

“Families with perceived affiliation to (IS)… often find their return blocked by security actors, experience community rejection and stigmatisation, and are at high risk of revenge attacks and violence,” a World Bank report released in January said.

“At the same time, it is common for people living in the area of return to fear that the return of families they believe supported or continue to support (IS)… will destabilise their communities and create new risks for security and social relations,” it added.

Around 30,000 Iraqis, including 20,000 children, remain stranded at Al-Hol, according to Iraq’s ministry of immigration.

Earlier this month, Iraqi Foreign Minister Fuad Hussein said his country was determined to repatriate all the families stuck in the Syrian camp after “security checks” are completed.

But he also urged the international community to help Iraq set up “re-integration programmes” for Jadaa’s residents, most of whom are women and children.

Over the past several months, more than 100 families have been able to leave Jadaa and reunite with their families in Iraq.

Shaima Ali, 41, is among those still waiting for that day.

But her greatest fear is that residents of her hometown in the Qaim border region with Syria will reject her.

“They say we’re a part of IS. It’s true my husband was a member of the group. But that was him, not me,” she said.

“If only I could get out” of the camp, said Ali, who lived for five years in Syria.