MADRID (AFP) – Robert Lewandowski (AFP pic below) got off the mark for Barcelona with a double as Ansu Fati starred as a substitute in a 4-1 victory over Real Sociedad on Sunday, while Villarreal won at Atletico Madrid.

But Fati came off the bench to create goals for Ousmane Dembele and Lewandowski, before completing the scoring himself.

Barca’s first win of the season followed a disappointing goalless draw at home to Rayo Vallecano on the opening weekend.

Coach Xavi had called for “patience” from supporters after a summer spending spree which saw Lewandowski, Raphinha, Andreas Christensen and Franck Kessie all move to the Camp Nou.

That quartet all made their debuts against Rayo, but France defender Jules Kounde is still to be registered by the club after his transfer from Sevilla as they look to overcome financial problems. 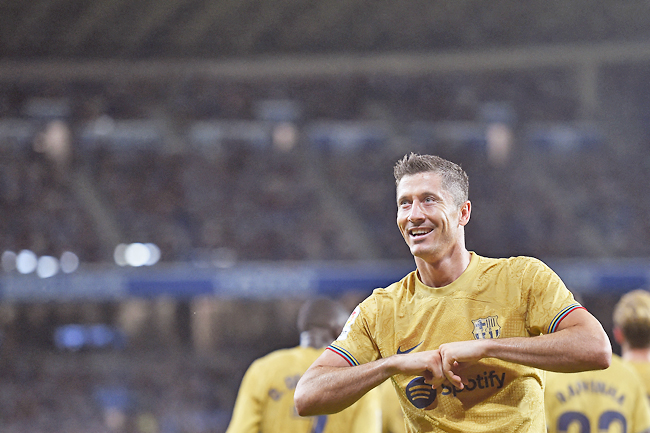 The visitors made a dream start on Sunday, though, as 18-year-old full-back Alejandro Balde raced clear and sent in a low cross which was tapped home by Lewandowski.

He scored 344 goals during a trophy-laden eight-year spell at Bayern Munich before leaving for EUR45 million in July.

But the home side hit back in the sixth minute, as Frenkie de Jong lost the ball in midfield and Isak raced clear before lofting the ball into the net.

Sociedad were proving a tough nut to crack for Barca, but the game changed when Fati was sent on in the 64th minute.

The 19-year-old’s brilliant backheel teed up Dembele to drill a left-footed strike into the bottom corner just two minutes later, before another clever touch found Lewandowski to score.