The trays of young trees stacked nine metres high inside the James Hutton Institute near Dundee in eastern Scotland are budding proof for Hay and others that LED light can be relied on to speed up their growth.

The specimens housed in the vertical farm unit there grew six times faster than using traditional outdoor planting methods, according to Forestry and Land Scotland (FLS), a government agency that manages the nation’s forests.

Its growth trials – in partnership with indoor horticultural specialists Intelligent Growth Solutions (IGS) – could kickstart a transformation in the forestry sector and help the UK meet its net zero targets quicker.

“Initial results were astonishing,” Hay, a manager at FLS, told AFP during a tour of the vertical farm, as a technician controlled a mechanical elevator accessing the stacks of shelves filled with seedling trays. 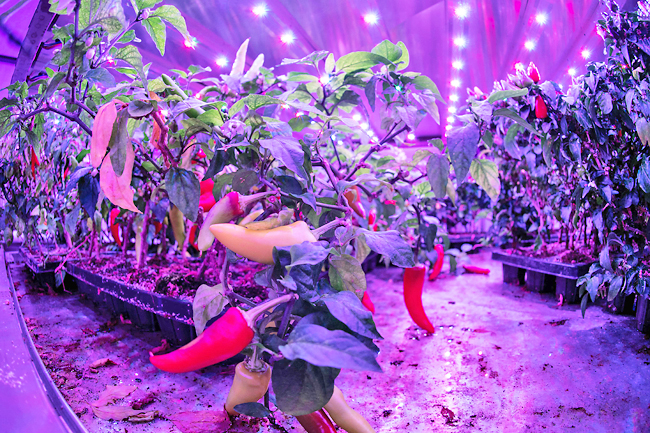 “We can grow a huge amount of trees in a very, very small area, which is obviously going to help climate mitigation.

“We will now look very carefully at how we might be able to integrate this into our normal processes.”

The vertical farm project, which occupies just 300 square metres (360 square yards), has “tremendous potential” for tree production, according to Hay.

The trials found some saplings grew 40-50 centimetres tall in 90 days. A similar rate of growth would take up to 18 months in an outdoor field.

The air inside the unit is warm and moist, adjusted to the ideal temperature and humidity level for the plants.

Researchers can tailor the light, humidity, water, temperature and soil so that each plant has its own specific “recipe”, Dave Scott, the founder of IGS, told AFP.

Water and nutrition are computer controlled and fed to plants through a network of plastic pipes.

Vertical farms operate with much higher humidity and lose far less water through transpiration compared to trees grown in polytunnels and glasshouses.

But Scott said advances in LED light technology were seen as the biggest factor behind the impressive results.

Each species of tree is assigned its own unique set of LED lights, mathematically adapted on the colour spectrum.

“Over the past years LED technology reached a tipping point, with efficiency doubling every year,” he said.

The trial has also thrown up complications to overcome.

Some saplings grew too fast, leaving their roots too weak to withstand the wind once they were planted at the FLS’s nursery in Elgin in the more remote Highlands of Scotland.

FLS and IGS are now running a new test to slow down the growth in order to ensure the saplings can develop stronger roots.

The ability to adapt the environment for each tree sapling has helped researchers meet such challenges, Scott said.

“You can stretch them, dwarf them, you can stress them deliberately to make them fit for the outside world. There’s many things you can do,” he added.

Each trial, he added, yielded better results than the last. FLS is aiming to plant around 24 million new trees a year, as demand for saplings spikes amid efforts to tackle climate change. But the need to rapidly plant trees has also ramped up demand for high quality seed, another of the myriad challenges facing the sector.