AP – It was October 29, 2003. LeBron James (AP pic, below) played his first NBA game. The Cleveland Cavaliers lost to the Sacramento Kings, and James scored 25 points.

That night, there were 2,708 names ahead of him on the NBA’s all-time scoring list.

Only one person remains ahead of James on the NBA’s career scoring ladder – Kareem Abdul-Jabbar, who has been the scoring leader since April 5, 1984. His run is about to end, the crown getting passed from one Los Angeles Laker to another in just 1,326 more points.

“To sit here and to know that I’m on the verge of breaking probably the most sought-after record in the NBA, things that people say will probably never be done, I think it’s just super, like, humbling for myself,” James said. “I think it’s super cool.” 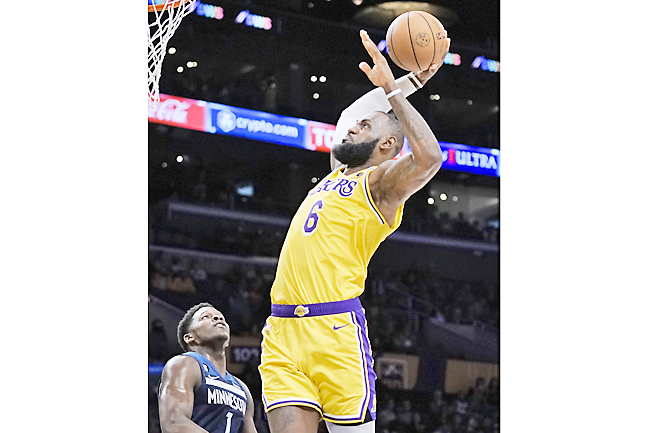 If James doesn’t miss games, the first target window is January. He’ll become the most prolific scorer while being one of the greatest passers ever; James is seventh all-time in assists and should be up to number four when this season ends.

“One of the things that’s really amazing about LeBron is he’s such a willing passer and such a gifted passer,” said Miami coach Erik Spoelstra, who coached James for four seasons and two championships.

“In many ways, that’s one of his most special qualities. And yet, he’s going to break the all-time record for scoring – and that can be a secondary skillset for him. That’s crazy.”

They put up their points in different ways: James, for example, has 6,420 points in his career from three-point range. Abdul-Jabbar has three.

Abdul-Jabbar’s sky hook took the NBA by storm from the outset. He averaged 30.4 points per game in his first six seasons and 24.6 over his career, though managed only 14.1 per game over his final three seasons.

James hasn’t had a dropoff. He’s averaged at least 25 points per game in each of his last 18 seasons. Before last season, only one player – Kobe Bryant, who put up 22.3 points in 2014-15 – averaged more than 19 points in the 19th season of his career. James averaged just over 30.

Put simply, no NBA player has ever been this good for this long.

“It’s always gratifying to know that the work that you put in can have results,” James said. “I’ve never been a person that cheats the game. I’ve always put the work in.”

He acknowledged a few years back that he “could see” himself catching Abdul-Jabbar, though stressed it wasn’t a priority.

The Lakers, just two years removed from the 2020 NBA title, were a disaster last season and missed the playoffs. James’ goal is to get back to championship contention, as he seeks a fifth ring. His work ethic still astounds those around him.

“LeBron is not from this planet,” first-year Lakers coach Darvin Ham said. “That’s for sure.”