GALLE (AFP) – Marnus Labuschagne hit an attacking 104 to help Australia regain control after losing their openers in the second Test against a COVID-hit Sri Lanka yesterday.

The tourists were 204 for three at tea in Galle with Labuschagne stumped off debutant left-arm spinner Prabath Jayasuriya.

The wicket ended a 134-run stand between Labuschagne and Steve Smith, who was batting on 52, after Australia elected to bat first in their bid to clinch the two-match series.

Labuschagne recorded his seventh Test century and his first away from home.

Sri Lanka struck early with lone pace bowler Kasun Rajitha getting David Warner bowled for five in the fifth over.

Off-spinner Ramesh Mendis cleaned up Usman Khawaja for 37 before lunch but Labuschagne stood firm and took the attack to Sri Lanka’s bowlers.

Both Labuschagne, who survived a missed stumping on 28 by Niroshan Dickwella in the opening session, and Smith handled the spinners with ease until the stand ended.

The hosts handed Test debuts to spinners Maheesh Theekshana and Jayasuriya along with all-rounder Kamindu Mendis after a coronavirus outbreak in their team.

Ramesh, who took four wickets in the previous match, has bowled a majority of the overs so far while Theekshana, Jayasuriya and Rajitha were rotated.

Sri Lanka’s Covid-19 count went up to five on the eve of the final Test. 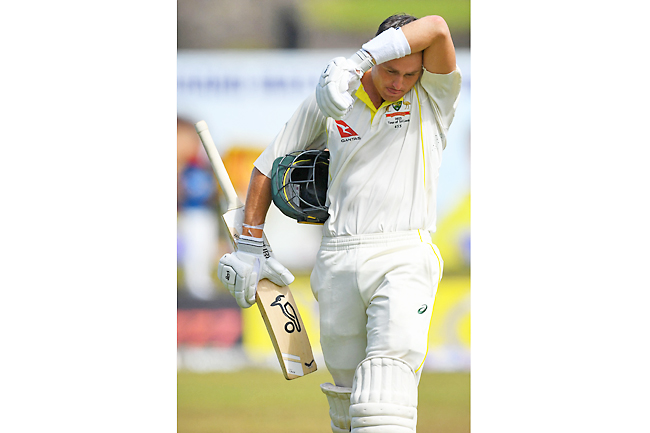