Koreans optimistic Son will be in Qatar, unsure he’ll play

SEOUL, SOUTH KOREA (AP) – Football fans in South Korea are desperately hoping that Son Heung-min (AP pic, below) is fit to play a full part at the World Cup which kicks off later this month.

It’s likely that, fully recovered or not, one of the biggest names in Asian sports will go to Qatar. The Korea Football Association (KFA) is optimistic Son will be fit for the opening Group H game against Uruguay on November 24.

“We are hopeful that he will recover in time but we are waiting for clarity on that,” a KFA official told The Associated Press.

“We think Son will go to the World Cup anyway, it is just a question of whether he plays or how much he can play.”

Son sustained a fracture around his left eye following a collision with defender Chancel Mbemba while he was playing for Tottenham Hotspur against Marseille in the UEFA Champions League on Tuesday.

Tottenham announced on Wednesday that the star forward would undergo surgery, although no timeframe has yet been put on his recovery. 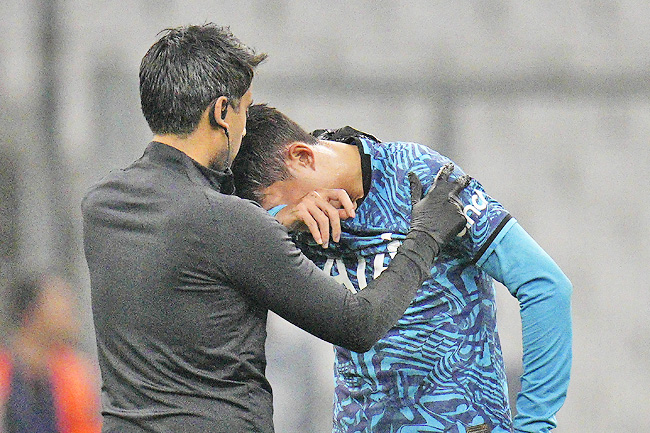 Son won the Premier League’s Golden Boot last season, the prize given to the top scorer over the season in English football’s top flight. He is also his country’s leading attacker with 35 goals.

South Korea, appearing at a 10th successive World Cup, was seen as an outsider to get out of a group containing Uruguay, Ghana and Portugal even with Son. Without the 30-year-old skipper, it will be even more difficult.

Teammates have also expressed their concerns for the team’s undisputed star. Midfielder Kwon Chang-hoon missed the 2018 World Cup because of a late injury and understands what Son is going through.

“Everyone is worried about Heung-min,” Kwon said. “All we can do here is to get the news from afar and we are all praying that Heung-min can recover quickly.”

South Korea’s domestic-based players and those active elsewhere in Asia are in a training camp in Paju, north of Seoul, in preparation for a final warm-up against Iceland on November 11. Coach Paulo Bento is set to name his 26-player roster the following day and the squad is scheduled to leave for Qatar on November 14.

“Since training has started, all the players are taking good care of their bodies and rather than thinking about Heung-min’s situation, I try to prepare in the same way,” Kwon said.

“Injuries come suddenly, but we need to prepare to prevent them.”