Keys to the World Cup final

AFP Sport looks at some of the keys to the game:

Lionel Messi and Kylian Mbappe are teammates at Paris Saint-Germain, but only one will return to the French capital happy.

Both have scored five times en route to the final, with Messi in particular growing in influence the deeper Argentina have progressed at what is his last World Cup.

They will have a big say over who hoists the trophy, the searing pace and devastating finishing of Mbappe up against the mesmerising close control, precision and vision of Messi.

Three of Messi’s goals have been scored from the penalty spot, while all five of Mbappe’s have come from open play – mainly the result of quick transitions. 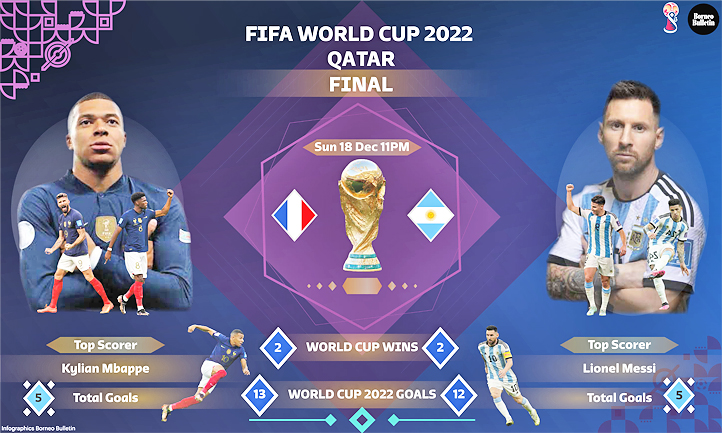 CAN ARGENTINA EXPLOIT FRANCE’S LEFT SIDE?

Messi produced one of the moments of the tournament when he danced down the right wing, twisting Josko Gvardiol inside out, before pulling back for Julian Alvarez to seal Argentina’s 3-0 victory over Croatia in the semi-finals.

That Messi was able to have his way with one of the best defenders at this World Cup suggests France’s left side will be an area Argentina will attack with regularity.

Mbappe has been given the freedom to roam for France but very rarely does he get back to help out defensively, a point Didier Deschamps addressed by bringing on Marcus Thuram against Morocco with France protecting a 1-0 lead.

Theo Hernandez is a more dynamic left-back than his injured brother Lucas, but it could allow Argentina right-back Nahuel Molina – set up by Messi for the opening goal in the quarter-final against the Dutch – to push forward as well.

France left Adrien Rabiot behind at the team hotel for the game against Morocco, while Ibrahim Konate replaced Dayot Upamecano in defence after the pair experienced “flu-like” symptoms in the build-up.

Deschamps downplayed concerns over Upamecano, who was well enough to sit on the bench, and said Rabiot “should be available” for the final. But there was surely growing unease on Friday at the illness spreading through the squad when Konate, Raphael Varane and Kingsley Coman all sat out training due to illness.

WILL GRIEZMANN CONTINUE TO DICTATE PLAY?

Mbappe and Olivier Giroud have combined for nine of France’s 13 goals, but Antoine Griezmann has flourished in a playmaking role in midfield – his diminishing strike rate offset by creative output.

With injuries forcing Deschamps’ hand, his decision to deploy Griezmann in a deeper position has worked wonders, with the Atletico Madrid star now focussed on supplying the frontmen.

Argentina coach Lionel Scaloni opted for a compact four-man midfield against Croatia, limiting the time and space for Luka Modric to effectively strip the opposition of their main weapon.

His plan to nullify the threat of Griezmann will be one to watch closely.