BAKHMUT, UKRAINE (AFP) – Mark Kupchenenko lives alone in a large abandoned house in the war-hit Ukrainian town of Bakhmut, apart from the troops he serves. He said, “So as not to get too close.”

Every day, the 26-year-old military chaplain visits the frontline army positions to try to bring aid to the troops.

His official job is to maintain “the very high morale” of soldiers serving at one of the most dangerous points on Ukraine’s eastern front.The reality he describes is very different.

Kupchenenko said, the soldiers fighting in Bakhmut are subjected to “incredible moral fatigue” as well as the mental variety.

He added that in this unending war of attrition, some fighters see themselves reduced to pieces of “meat, good only for sending to their death”.

“These are fighters who do not rotate. That is, they constantly fight actively at the front without rest. They miss their relatives, they don’t see them for a long time.” 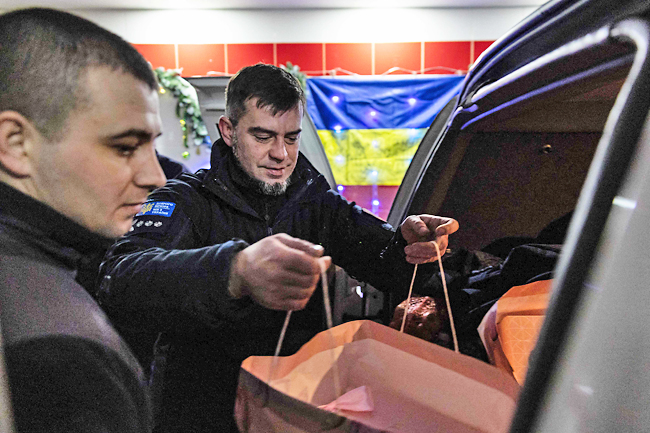 Some, he said, have “panic attacks, when a person’s hands shake, when he becomes restless, when he cannot force himself to go on a mission”.

Rest, given the conditions at the front, is as good as impossible.

He said, some “feel abandoned. They have the feeling nobody needs them”.

Before joining up, the young priest was a prison chaplain and he has also worked with COVID patients and sick children.

Those previous jobs helped prepare him for the trials of his current work in the grisly conditions at Bakhmut, the scene of months of fierce fighting since the start of the Russian invasion on February.

He said, “I communicate, pray and I answer difficult questions that arise for soldiers in such conditions. And there are many.”

For more than six months, Russian forces and paramilitaries from the Russian Wagner group, whose founder has called the fight for the city the “Bakhmut meat grinder” have fought, so far in vain, to capture it.

Both sides have suffered heavy casualties amid the destruction of much of the city, most of whose pre-war population of some 70,000 has left.

“My role as chaplain is to remind them why they are here.”

They may well be there because they were ordered to the front by their superiors, he said. But that does not change the importance of their role.

“They are primarily here because they are a human shield between the enemy and our families, our people.”

Kupchenenko said, without them, “The orcs would be in our homes, they would rape, cut, kill, destroy”.

Ukrainians often refer to the Russian troop as orcs, a reference to the savage, goblin-like monsters from JRR Tolkien’s Lord of the Rings.

Of the troops he serves, he said, “They are giving their souls for us, for their people, their families. I cannot guarantee them that they will return. But I tell them words of comforts.”