THE WASHINGTON POST – “In India and Southeast Asia, no one ever reads The Ramayana and The Mahabharata for the first time,” wrote the Indian poet and scholar AK Ramanujan.

The scope and influence of The Ramayana rival those of other texts: The earliest Sanskrit version, 24,000 verses written by the Hindu poet Valmiki, is more than 2,300 years old. It has had hundreds of adaptations.

The epic recounts the life of Rama, a young prince of the ancient kingdom of Kosala and an avatar of Vishnu. In traditional tellings, Rama’s adventures begin when he is exiled by his stepmother Kaikeyi, one of the wives of Kosala’s Raja Dasharath. Kaikeyi’s biological son, Bharata, had seemed set to inherit the throne, but the king decides to install Rama instead. Kaikeyi, a loving stepmother to all her husband’s children, at first accepts this news with joy.

But then, egged on by her maid Manthara, Kaikeyi abruptly changes her mind and calls in two boons owed her by the king. In Arshia Sattar’s abridged 1995 translation, the scene transpires like something from a fairy tale:

“Swayed by Manthara’s words, golden-skinned Kaikeyi flung herself on the ground.

‘Manthara, go and tell the king that I lie here dying. Unless Rama is sent into the forest and Bharata anointed in his place, I shall kill myself!’”

With this whiplash turn from devoted wife and parent to scheming queen, Kaikeyi joins the pantheon of wicked stepmothers – an unsavoury roster from which she’s rescued in Kaikeyi, Vaishnavi Patel’s debut novel, a powerful, feminist retelling of the epic from the vilified queen’s point of view. A Chicago native and student at Yale Law School, Patel brings a no-nonsense approach to Kaikeyi’s story: Deities and magic play a subsidiary role to gender politics and a refreshingly warm depiction of relationships among the multiple wives and children in a sprawling royal household. 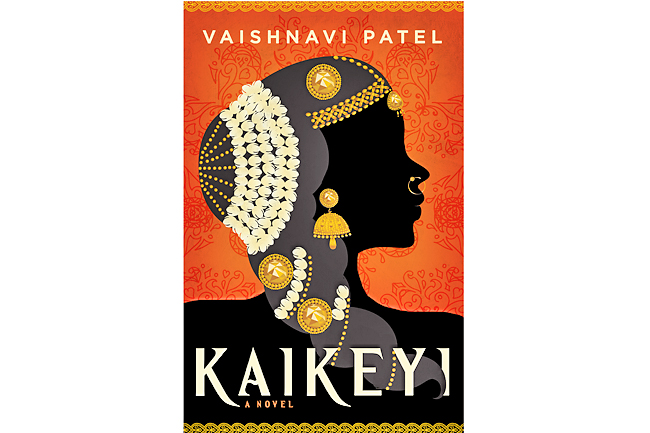 “I was born on the full moon under an auspicious constellation, the holiest of positions – much good it did me,” Kaikeyi states as the novel opens. But when her twin brother enters the world minutes later, “I was but a dowry of fifty fine horses waiting to happen.” Over the years, six other brothers join the family. Under her twin’s tutelage, Kaikeyi becomes skilled at horsemanship and the use of weapons. When she is 12, her mother, Kekaya, is banished from the kingdom, seemingly without reason. Kekaya “never cuddled me… Instead, she taught me how to read… And even then, she did not praise me. But she gave me scrolls and listened as I picked out stories”.

Kaikeyi finds a magical scroll that allows her to enter the Binding Plane, a liminal space where she can perceive the invisible bonds that connect her to others – shimmering threads that wax and wane depending on how powerful her connection is with any individual. But Kaikeyi doesn’t just see the bonds: She learns how to tug the unseen cords to get her way, without another’s knowledge. Her skills serve her well after her arranged marriage to Raja Dasharath.

As his youngest and third wife, Kaikeyi is at first unsure of her place at court but quickly proves herself when she accompanies him to battle. Acting as his charioteer, she saves his life, and Dasharath grants her two boons. “I place no restrictions on these,” he tells her.
Kaikeyi doesn’t cash in these favours – yet. Instead, she uses her supernatural power and royal influence to overturn laws that doom women to lives of servitude and poverty.

“Opening the court to women. Permitting women to learn in the open market schools. Allowing women to maintain their own stalls in the market – and perhaps even hold property. Being unmarriageable would no longer be a life sentence then.”

Kaikeyi’s loving relationship with her husband is defined by mutual respect and friendship, not romance. Indeed, there’s virtually no erotic frisson in Patel’s retelling of an epic that is aglow with passion. There’s no jealousy or rivalry between Kaikeyi and Dasharath’s other two wives, who become her devoted friends and companions. When the three women take part in a ritual designed to produce a male heir, Agni, deity of fire, appears. All those assembled fall to their knees – everyone but Kaikeyi. Her refusal isn’t born of defiance; when Agni demands why she doesn’t bow, she answers honestly: “I do not know.”

But the infernal Agni knows, as does any reader familiar with The Ramayana: Kaikeyi is destined to play a villainess in the great game of deities and mortals. Nothing will change that, especially once Dasharath’s sons are born and it becomes evident that Rama is the avatar of a deity – and not always a nice deity. Like his stepmother, Rama can enter the Binding Plane, which he uses to disempower the women Kaikeyi has worked tirelessly to help. Spurred by his misogyny, she demands the two boons of her husband, with tragic results.

Patel’s vast tale unfolds at a measured pace, its careful depiction of one woman’s struggle to bring justice to an unjust world brightened by thrilling battle scenes and encounters with deities who have no concern with humans or their fates. The novel’s climax comes long before the main events of The Ramayana, by which point Kaikeyi has joined the wearingly long list of powerful women whose motivations are questioned but seldom described, yet alone explored. In Kaikeyi, Patel resets the balance of power, creating an unforgettable heroine who understands that it isn’t necessarily kings or deities who change history but a disgraced woman who can look upon a group of girls and see “a child, freer than her mother had been”.